Sometimes I think I could do “Wasp Wednesday” for years just focusing on the subfamily Eumeninae (potter and mason wasps) of the Vespidae (social paper wasps, hornets, yellowjackets; and the solitary mason wasps). The diversity is so great that it seems impossible to exhaust them as subject matter. It helps that they are also amazing in terms of behavior; and common enough that virtually anyone can find them. Such is the case with the genus Symmorphus. 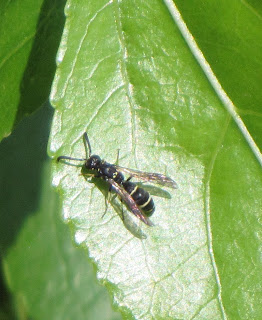 I had to double-check to make sure that the male wasp I recently photographed at Fountain Creek Regional Park in Colorado was indeed a species of Symmorphus. Eumenid wasps are challenging to identify even to genus. I find that most specimens of Symmorphus are small (roughly 6-10 mm), and slender compared to most other mason wasps. This is especially true of the males.

The defining characters of the genus are harder to see, however. The first dorsal (top) segment of the abdomen has a horizontal ridge (“carina” in scientific terms) about halfway down its length. That same segment also has a shallow vertical groove. Males have the last segment of the antennae simple, whereas in other genera of eumenids this last segment may be hooked or coiled. 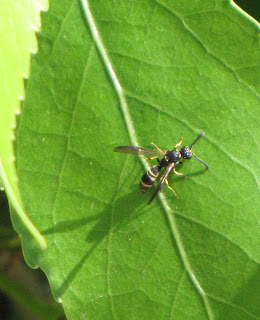 Four species of Symmorphus occur in North America: S. albomarginatus ranges from Alaska to California, New Mexico, Quebec, and much of the eastern U.S. S. canadensis, our smallest species, is transcontinental except for Florida, Texas, New Mexico, and Arizona. S. cristatus is equally widespread, from Canada southward. S. projectus is strictly western, from the Pacific Northwest to Montana, Wyoming, and southward.

Mason wasps are our friends, for they prey on larval insects that can defoliate trees and shrubs if not culled by predators. The female wasps hunt the caterpillars and larvae and store them as paralyzed victims for their offspring to eat. Symmorphus wasps are specialists on the larvae of leaf beetles, weevils, or leaf-mining moth caterpillars.

The female wasp uses a pre-existing cavity in wood, or a hollow twig or stem for her nest. She partitions the tunnel into several cells placing a curtain of mud between each cell. She starts from the back and works forward. She first lays an egg in the cell, then begins hunting prey. Symmorphus are remarkably efficient in provisioning their nests. One 7-cell nest of S. canadensis was completed in about three days (Krombein, 1967).

The number of prey larvae per cell depends on the size of the prey, and in part on the gender of the wasp’s offspring. Female eumenid wasps can control the gender of each egg they lay. Larvae of female wasps generally require more food than male offspring.

Symmorphus often leaves an empty (“vestibular”) cell upon completion of the nest. This dummy cell may be an attempt to fool parasitic insects into thinking they have found an entirely empty nest. Some nests also have “intercalary” cells that are also vacant, between a series of provisioned cells. Despite this, nests are frequently parasitized by cuckoo wasps (family Chrysididae), eulophid wasps (genus Melittobia, family Eulophidae), a torymid wasp in the genus Monodontomerus, and satellite flies (genus Amobia, family Sarcophagidae). The Grain Itch Mite, Pyemotes ventricosus can infest nests; and scavengers like humpbacked flies (family Phoridae) and carpet beetles (family Dermestidae) may destroy wasp eggs in the process of consuming the stored prey intended for the wasp’s offspring. 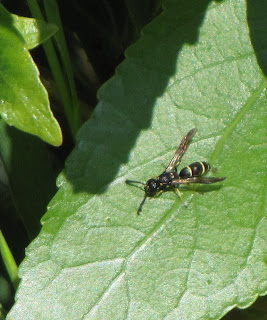 Symmorphus is one of those wasps for which you can provide housing in the form of holes drilled in wooden blocks and placed in sheltered situations like the stack of firewood, or under an eave on your home or garage. They favor holes 3-4 millimetes in diameter, and probably no more than six inches deep. Try it. They will help keep your trees free of leaf beetle larvae in exchange for free rent.

Also look for these wasps around aphid colonies. Like most eumenids, and other wasps, they like the sweet, liquid waste secreted by aphids. Called “honeydew,” this sticky substance is like manna from heaven to many kinds of insects. 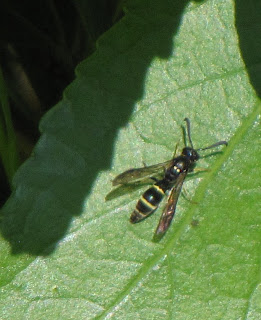