Oh what a tangled web they weave: meet the labyrinth spiders in the genus Metepeira. It may come as a surprise to learn that these little arachnids are in the orb weaver family Araneidae. The first thing one usually sees when spotting their web is the tangled network of lines surrounding a thimble-like retreat decorated with debris. Sometimes the retreat itself is all that is obvious. 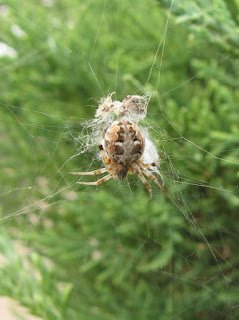 There are apparently thirteen species of Metepeira currently recognized as occurring in North America north of Mexico. Only one of these is called the Labyrinth Spider: Metepeira labyrinthea, which ranges in the eastern half of the U.S. and north to southern Ontario, Canada. Look for it in shrubs and the low branches of trees along forest edges. The genus is most diverse in the west and southwest. I have found other species of Metepeira to be reasonably common, or even abundant, in arid habitats in the western U.S. (eastern Oregon and southeast Arizona). 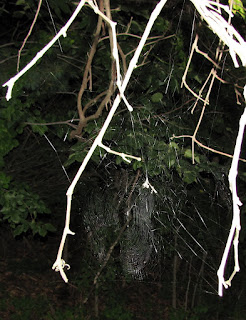 The cobweb-like snare is only half of the structure of a Metepeira web. A small orb web completes the picture, but it is not often easy to see. The spider hides in its tent-like retreat, connected to the hub (center) of the orb web by a signal thread. When a prey insect impacts the orb, the spider dashes down to secure its potential meal. 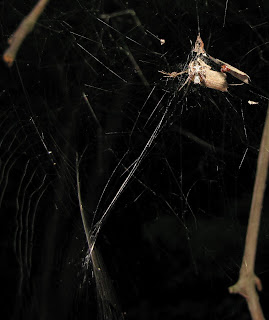 The spiders themselves are not very large. Mature females are 5.5-7.2 millimeters in body length, while males measure only 3-4.5 millimeters. Because their color pattern is so variable, labyrinth spiders can be easily confused with other kinds of orb weavers. This is especially true if you find a specimen that has no associated web. Mature males wander in search of females, so they are often encountered on vegetation without a web. 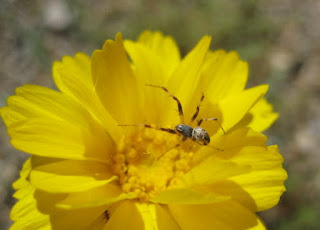 These spiders usually reach adulthood in late summer or early autumn, at least in more northerly latitudes. Mated females create one or more egg sacs, each of which is roughly cone-shaped and covered in brown, papery silk. The spider stacks these above her in her web.

Interestingly, the species Metepeira spinipes, which ranges from southern Oregon into Mexico, sometimes exhibits social tendencies, individual spiders interlacing their webs over large areas. This cooperative behavior tends to be associated with higher-than-normal prey availability, and also certain kinds of habitats. Prey abundance in turn coincides with years in which the El Niño weather phenomenon asserts itself.

The social nature of that species and the Mexican Metepeira incrassata has another benefit: it reduces the likelihood of any one female spider will be killed by a spider wasp (Pompilidae: Poecilopompilus mixtus); or have her egg sacs fall prey to parasitic wasps (Ichneumonidae).

Enjoy looking for labyrinth spiders right now, as this is the time of year they are most in evidence. Just don’t become entangled in trying to identify them to species. 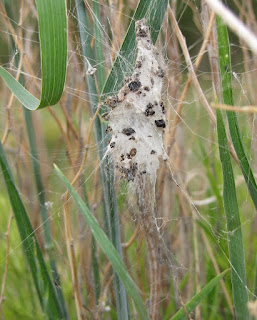