People who have minimal knowledge of wasps can’t really be faulted for having a startled or panicked reaction when confronted with one of these creatures, especially if it is a large insect. Among the more intimidating of wasps are the horntails in the family Siricidae. They do not sting, but they look like they can. Here in the Front Range of the Rockies, the most common species of Siricidae is the “Pigeon Tremex,” Tremex Columba. 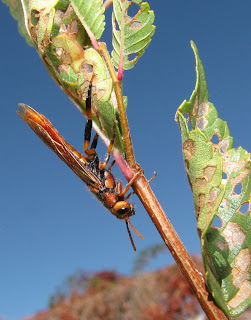 So far, I have encountered only male specimens, resting quietly on foliage at about eye-level. They can be approached easily and closely if you are careful. This is a native species ranging widely from Nova Scotia, New Brunswick and Quebec, south to Florida, and west to Mexico, Arizona, Utah, and Colorado. There are even a few records from southern California.

Siricids in general are more closely related to sawflies than any other wasps. The abdomen is joined broadly to the thorax, giving the entire creature a cigar-shaped appearance. They are about a third the size of a stogie, too. Adult females range from 37-50 millimeters (1.5-2.0 inches). Males average smaller, from 18-37 millimeters. Note that western specimens of Tremex Columba are usually much paler in coloration than eastern specimens. 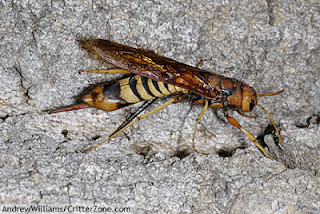 The females are equipped with what looks like two stingers, one short one protruding from the top of the tip of the abdomen, and another longer, needle-like rod at the bottom of the abdomen. The wasps are, in fact, non-venomous. The top “horn” is called the “cornus,” and both genders possess this spur, which gives the family its common name of “horntails.” I have been unable to find an explanation of the function of the cornus, if there is one. The longer appendage is an egg-laying organ called the “ovipositor.” The female uses this complex part of her anatomy to insert eggs into dead, dying, or weakened hardwood trees. Maple, beech, elm, apple, pear, poplar, oak, hickory, sycamore, and hackberry are all known hosts of this wasp, but other deciduous trees in poor condition are probably utilized as well.

The ovipositor acts like a drill and hypodermic needle. It is housed in a two-part sheath that helps to brace the sawtoothed egg-laying organ as it works its way into bark and wood. Lumberjacks have a vulgar nickname for these wasps, owing to what the wasps appears to be doing when they oviposit into a bole or stump. I’ll leave that epithet to your imagination. 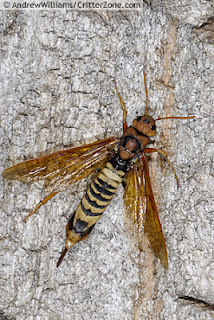 Not only does the wasp lay her eggs in the tree, she also delivers a wood-rotting fungus, Cerrina unicolor to the site of each egg insertion. She stores the fungus in special abdominal glands called mycangia, until she is ready to deploy it. The fungus breaks down cellulose, and both fungus and decayed wood are then consumed by the larval wasp.

Larval horntails are grub-like, and easily mistaken for beetle grubs save for the cornus on the very tip of their worm-like bodies. It usually takes more than one year for the horntail to complete metamorphosis. 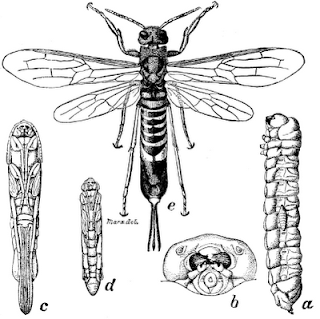 You would think that a larva tunneling inside a tree or log would be safe from its enemies, but such is not the case. Huge wasps called giant ichneumons can drill down and reach the horntail grubs. One of my most popular blog entries chronicles the life cycle of these Megarhyssa wasps. Yet another kind of wasp attacks younger larval stages of horntails. Wasps in the family Ibaliidae (and genus Ibalia) drill down to reach horntail larvae that are at a more shallow depth. 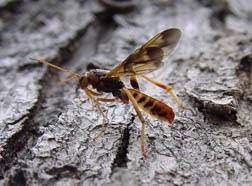 Pigeon Tremex horntails that survive the perils of youth eventually pupate, emerging as adults most often in late summer or fall. Right now is the ideal time to find them, but you have to look at a lot of dead, standing trees to find them. Horntail species that use coniferous trees as hosts are often attracted to wildfires, since fire often weakens trees. Many wood-boring beetles are also active in the wake of conflagrations.

Please help spread the word that with few exceptions (introduced species like Sirex noctilio for example), horntails are not pests, but merely exploit trees that are already damaged by environmental stress, and/or diseases or other destructive insects. They are important to forest ecology and the average homeowner has no need to control them. 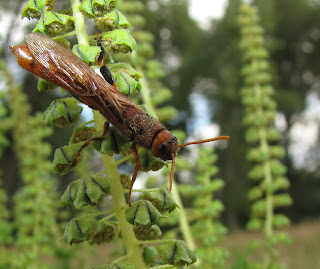