Earlier this month, on July 3, I was fortunate enough to be in the right place at the right time to make an important observation and documentation of a male Filigree Skimmer, Pseudoleon superbus, in Colorado Springs. This represents the first confirmed state record for the species as well as a significant northern range extension. 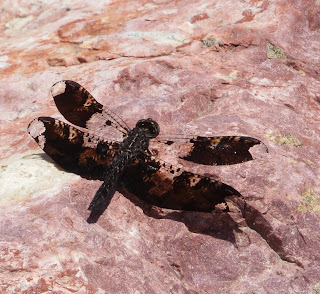 There is a vast series of vacant lots up the hill from my home that includes a narrow, deep riparian corridor through the otherwise degraded shortgrass prairie habitat of the hills. The channel carries water dependably throughout the year, and trickles into Sand Creek, a wide, mostly dry riverbed that sometimes runs in very shallow, meandering rivulets (except during storms when the volume is much greater). 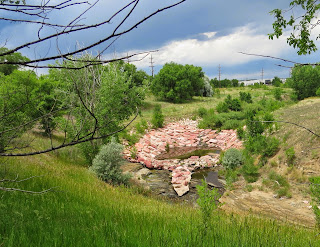 The Filigree Skimmer was frequenting the large pond shown in the habitat shot above, repeatedly perching on the rockwork between forays up and down the watercourse. At first I assumed it was probably a Common Whitetail, Plathymis lydia, but something about those wing markings looked a bit off. Noting where it was repeatedly perching, I worked my way into a position where I could get the images shown here, taken with a Canon Powershot SX50. That powerful zoom sure comes in handy at times like this.

The near pristine condition of the specimen makes me wonder if perhaps the species does breed here rather than migrate up from the species' usual range of southern and central Arizona, New Mexico, and western and central Texas. This is essentially a subtropical species found as far south as Costa Rica, though mostly in dry uplands there.

Male specimens have the wings mostly blackish, especially the hind wings. Females have much less black, arranged in an abstract, reticulated pattern. Both genders have the "pinstripes" on the eyes. The total body length varies from 38-45 millimeters, and the length of the hind wing averages 30-35 millimeters. 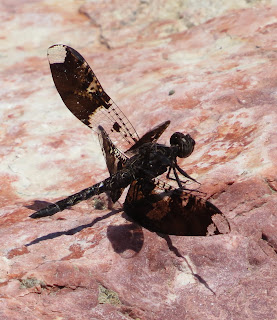 The preferred habitat for the Filigree Skimmer is a rocky stream or river with a slow or moderate current, usually in an open setting. The little creek where I found it certainly fits the bill. Females lay their eggs by hovering and dipping the tip of their abdomen into the water, usually in the vicinity of algal mats or piles of detritus. There is plenty of both in this location, too.

Bill Maynard, our local authority on Odonata, asked for directions to the spot where I saw the skimmer, and he visited on July 4 but had no luck. Ironically, he did observe several species of damselflies that I had not yet documented for the area. He also got a lovely image of a Gulf Fritillary butterfly, as likely to be seen this far north as the Filigree Skimmer. 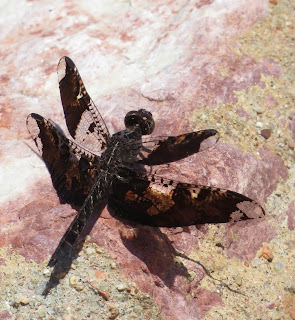 My record of the Filigree Skimmer is awaiting confirmation at Odonata Central. I encourage my readers to consult that website to see what species have been recorded in their state or county, and add their own observations as they deem appropriate.

Just because you have "never seen this (insert name of insect or other arthropod here) before in (your) life," and you have "lived here for (insert number of decades or years)," does not mean that it is something rare or exotic or otherwise novel. BUT, sometimes it really is a unique find worthy of note. That is your take-home lesson for today: Be observant and don't assume anything. It helps me to have some knowledge of what should and should not be here in Colorado, but you, too, can make significant contributions to our collective scientific knowledge. 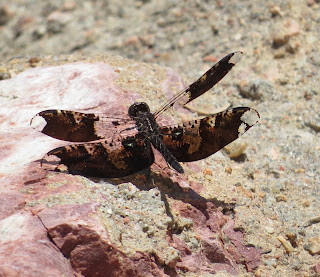