Grasshopper populations in general tend to fluctuate greatly over time depending on whether a given year is "wet" or "dry." Some species prosper more during dry years, while others are more abundant in wet years. This spring and summer has been decisively wet here on the Front Range of Colorado, with a corresponding explosion of species like the Thistle Grasshopper, Aeoloplides turnbulli, the subject of this week's "OrThoptera Thursday." 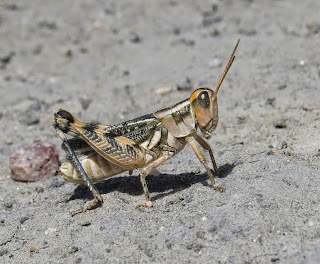 Initially, I mistook this species as "just another Melanoplus species," and indeed it belongs to the same subfamily (Melanoplinae) of the family Acrididae (short-horned grasshoppers). The Melanoplinae are collectively known as spur-throated grasshoppers for the peg-like process jutting from beneath their "neck." It is not an obvious feature unless you grab a specimen and turn it over.

The Thistle Grasshopper is of average size for acridids, males measuring 16-20 millimeters, and females 19-25 millimeters. It varies from greenish to mottled gray or brown, with yellow antennae and bold stripes behind the eyes. The hind femora ("thighs") are strongly banded; and the hind tibiae are blue. Wing length varies, at least by subspecies. The northern subspecies, A. t. turnbulli tends to have the wings shorter than the length of the abdomen by 2-4 millimeters. The southern subspecies, A. t. bruneri, has wings that exceed the length of the abdomen. 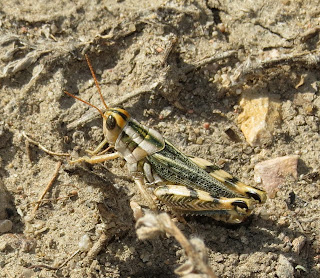 The name "Thistle Grasshopper" is a bit of a misnomer. They are not associated with true thistles (Cirsium spp.), but are found where Russian Thistle, better known as "tumbleweed," has taken over the landscape. A. turnbulli feeds on a variety of other plants as well, especially saltbush (Atriplex spp.), which is native and exceedingly abundant in the shortgrass prairies abutting the Rocky Mountains.

The Thistle Grasshopper ranges from Alberta and Saskatchewan south through Montana, Wyoming, Colorado, New Mexico, the Dakotas, Nebraska, Kansas, northern Oklahoma, and western Texas. It is apparently expanding its range eastward, so keep an eye out for it in adjacent states. The adults are present between June and October. 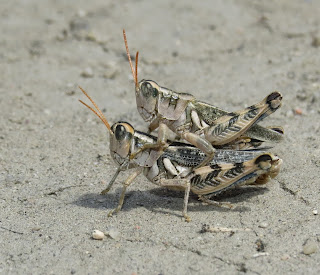 Pair in copula, male on top

If this species stuck to eating tumbleweeds and other invasive plants, it would be considered a highly beneficial insect. Unfortunately, its diet also includes sugar beets, and it has historically been a pest of that crop. A. turnbulli also competes with livestock on occasion, eating forage plants like lambsquarters, winterfat, kochia, saltbush, and other members of the family Chenopodiaceae.

Given the extreme proliferation of Russian Thistle here on the edge of the plains, I am still inclined to be a fan of the Thistle Grasshopper. We had the "tumbleweed apocalypse" around here last year, with various government agencies, homeowners, and ranchers struggling over ways to unclog roadways and fencelines, and uncover houses and vehicles every time we had strong winds. Go Aeoloplides turnbulli! 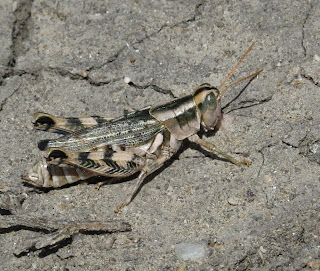 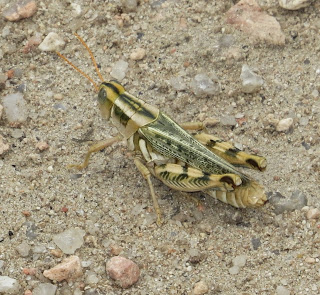