Yesterday was "OrThoptera Thursday" in the truest sense. I had the car at my disposal, thanks to my wife and a co-worker carpooling, so I drove out into the rural plains of eastern El Paso County in search of grasshoppers. This was the first time since my arrival in Colorado that I simply went out walking in the vast shortgrass prairie east of Colorado Springs. Much to my delight, I managed to find the creature at the top of my list: the Great Crested Grasshopper, Tropidolophus formosus. 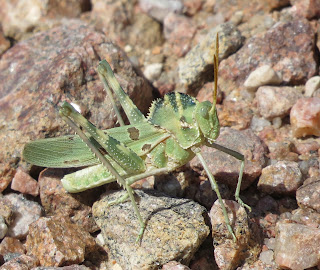 This species is also known as the "dinosaur grasshopper" for the resemblance of its pronotal crest to the fin-like structure on the back of Dimetrodon dinosaurs. The grasshopper's crest is studded with fine, prickly teeth on the rear half, barely discernible in the images shown here.

These are large insects, adult males attaining a length of 35-46 millimeters, and female 38-50 millimeters. Males are fully-winged, but the wings of the female are short, barely extending half the length of the abdomen. Despite their size and ungainly appearance, they are wary and surprisingly agile, not to mention cryptic. The only way I managed to find them was by flushing them from the vicinity of dense vegetation and hoping I could follow their flight path. I never did find a female. 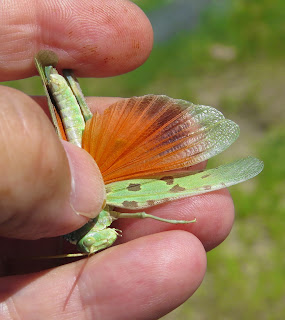 The Great Crested Grasshopper is one of the band-winged grasshoppers in the subfamily Oedipodinae, family Acrididae. The hind wings are a lovely vermillion, with a diffuse dark band near the wing margin, as shown here. In flight the species is not easily confused with other red-winged grasshoppers.

The references I have consulted indicate that males have a noisy flight, especially in courtship displays, but all the individuals I encountered flew silently....and far. Invariably, it seemed, they always flew to the other side of the barbwire fence. 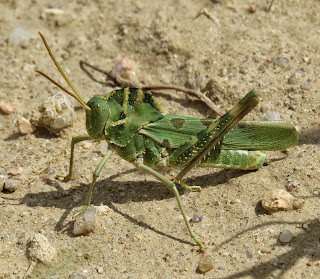 The preferred food of this grasshopper is apparently globemallows, (Sphaeralcea spp.), Malvastrum, and other members of the family Malvaceae. It has also been found in association with Buffalo Bur, Solanum rostratum. Because it does not favor crop plants or rangeland forage consumed by cattle, the Great Crested Grasshopper is not considered a pest species. Further, it is not terribly abundant. I found a grand total of about eight or ten specimens yesterday, in hours of looking. 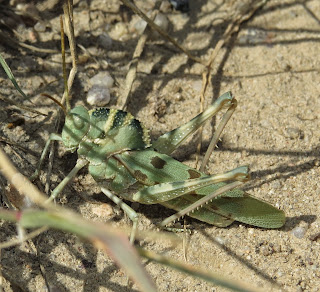 Tropidolophus formosus is not widely distributed, found mostly in the southern Great Plains, but ranging from southeast Wyoming and southwest Nebraska south through eastern Colorado, western Kansas, Oklahoma, and Texas, eastern New Mexico, and southeast Arizona. It is also found in northwestern Mexico. Adult specimens can be found from July through October across that area.

The plains and prairies may seem devoid of life except for the occasional herd of deer, pronghorn, or bison, or soaring hawk, but look closer and you will find an abundance and surprising diversity of life, from reptiles (two lizards and one snake for me yesterday) to insects. I encourage you to explore that biome, and do so often. The animals you find will vary dramatically depending on drought or monsoon conditions. 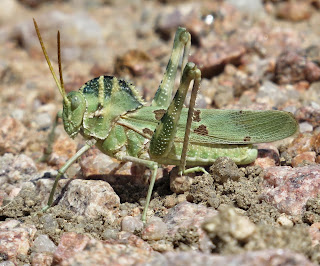