When my wife and I were in Atlanta back in June of this year, I had the opportunity to walk from our downtown hotel out to the Fernbank Natural History Museum along a route prescribed by one of the Google services. Taking a detour into a wooded ravine along a creek led to the discovery of a lovely little jumping spider, Tutelina similis. 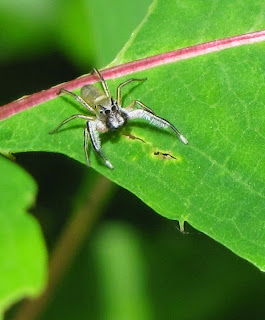 Since signing a contract to do a new field guide to U.S. spiders for Princeton University Press, I have been crafting a species list. Upon first spotting a male T. similis I thought to myself: "That is not on my list. It sure is now!" I had no idea at the time exactly what it was, other than a member of the Salticidae, but its bold, attractive markings made it stand out. 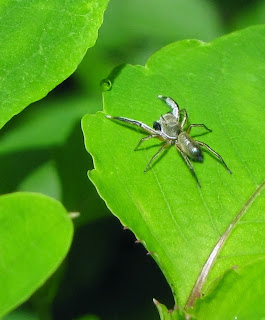 What are we looking at when we stare into the face of one of these? Well, the pedipalps are the most obvious feature. Those are the short, leg-like mouthparts. In this case, they are black on the outer half, with a fringe of long white hairs on the inner half. The palps usually hide the chelicerae (jaws) unless the spider drops the palps and raises its "head" (cephalothorax). This species also appears to have "eyebrows" in the form of short black lines on the cephalothorax immediately behind the very large anterior median pair of eyes. It makes the spider appear to be in a state of perpetual surprise (or anger, depending on your viewing angle). 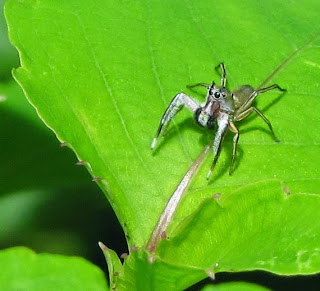 Despite their small size (4.0-5.0 millimeters body length), these are pretty conspicuous spiders that in this case were prowling understory vegetation about three to four feet off the ground. The sunlit patches where the deciduous tree canopy opened up seemed to be a favorite hunting ground. Indeed, insect activity peaks in these situations where flies, wasps, bees, and other potential prey bask, and defend territories.

Browsing through Bugguide.net, I was able to identify this species. My friend Troy Bartlett had even photographed a few. The overwhelming number of records on that website are from the month of June, so apparently the spiders mature at that time.

Like most jumping spiders, this species exhibits sexual dimorphism. That means that mature males differ markedly in appearance from mature females. I did not find any females myself, but below is an example of one from Hastings, Ontario, Canada, via Bugguide.net. The females are slightly larger than the males, but not dramatically so. 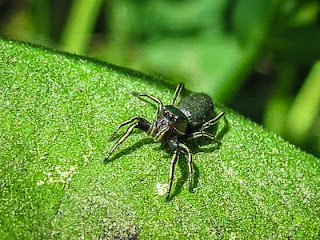 Tutelina similis is transcontinental in its Canadian distribution, and ranges east of the Rocky Mountains in the U.S. to at least Georgia and New Mexico. It has been found on mailboxes in rural Massachusetts (Edwards & Edwards, 1997), and in the seedheads of pitcher plants in Maine (Jennings, et al., 2008).

At least one population of this species in Utah was found to be a specialist predator on ants, even mimicking ants in color and behavior as it prowled over sagebrush. The front legs of these arachnids are waved about in the manner of ants waving their antennae (Wing, 1983). 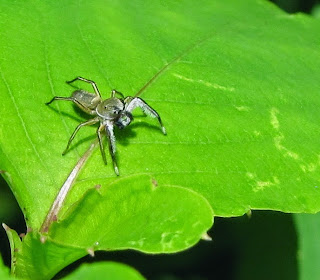 It is species like this that make jumping spiders a favorite among people who study spiders. The wide-eyed stare and curious nature of salticids is enough to melt the heart of the most extreme arachnophobe, and endear them to gardeners and homeowners who might level a shoe at any other arachnid. Couple that with the extraordinary hunting skills that make jumpers heroes in the war on pests, and you have pretty much the poster child for why we should embrace spiders as a whole. 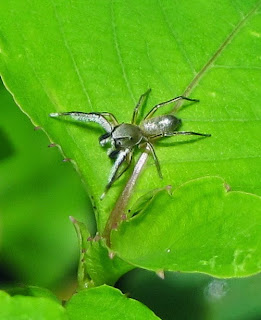