When I lived in Oregon, one of the most common spider wasps I encountered was a lovely little iridescent blue-black species, Aporus luxus. My wife and I traveled to Oregon earlier this year, and on July 12 I found the two specimens pictured here at a rest stop on Interstate 5. 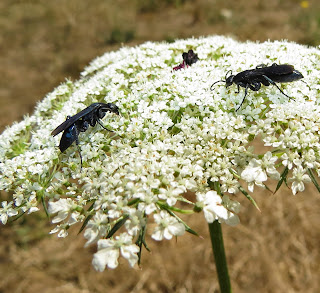 One of the easiest ways of identifying the seven members of the genus Aporus is by the way the front of the thorax slopes gradually toward the head, giving a very streamlined appearance. The front legs are short, and indeed all the legs are proportionately shorter than in other spider wasps. The antennae are relatively short and thick, a trait they share with the unrelated genus Evagetes, but the latter has a much blockier thorax. 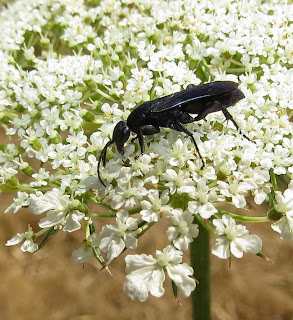 At only 8-15 millimeters in body length, these are not large insects that are apt to attract your attention in the field, but they are common wasps on flowers of Queen Anne's Lace (aka Wild Carrot), Daucus carota, and other umbelliferous blossoms that afford the wasps nectar and an unobstructed view of potential incoming danger. While thus occupied they are fairly easy to approach. Constantly moving, they still make a challenging target for photography. 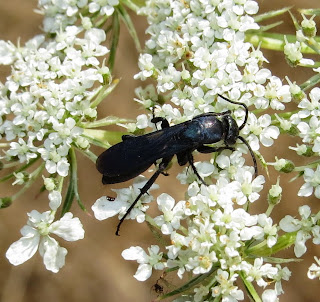 The life history of the larval stage is almost wholly unknown. An adult male wasp was reared from a wafer-lid trapdoor spider, Aptostichus sp., in the family Euctenizidae. The spider is stung into paralysis by the adult female wasp, and she utilizes the spider's own burrow as her nest, depositing a single egg on her victim. There is only one generation in most cases, though in southernmost latitudes there are apparently two generations annually.

This species ranges from central British Columbia to central Baja California, eastward to western Idaho and Utah, and most of Arizona. There is one record from Montezuma County, Colorado (Evans, 1997). Adult specimens are most common between the months of May and October. 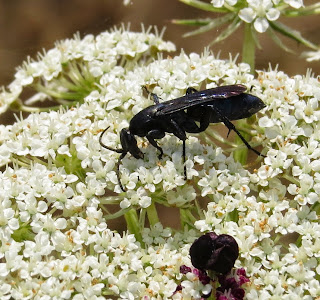