How to Catch a Leafroller Caterpillar (Video)

Solitary wasps are amazing creatures, and their hunting behavior is particularly interesting. While my wife and I were in western Massachusetts last month, I was privileged to witness a female mason wasp, Ancistrocerus unifasciatus, successfully capture a leafroller caterpillar. I also got parts of the drama on video. 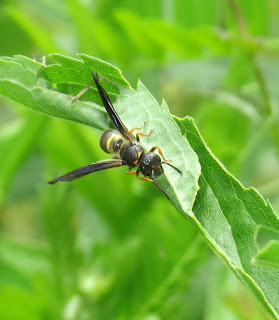 The scene: A large suburban residential backyard in Athol, Massachusetts, specifically planted to attract all manner of pollinating insects. Natural habitat is mixed hardwood and conifer forest, that abuts the property where this episode took place. Western Massachusetts is an odd mix of suburban and rural, actually, and it is difficult not to characterize this particular property as a "farm."

The leading actress: Ancistrocerus unifasciatus is a mid-sized mason wasp in the family Vespidae, subfamily Eumeninae. Females have a forewing length of 9.5-12 millimeters, males a forewing length of 6.5-9 mm. Both genders are basically deep brown or black with few yellow markings on the face, antennae, base of the abdomen, and legs. Males have a large yellow patch on the face, females a couple of spots. 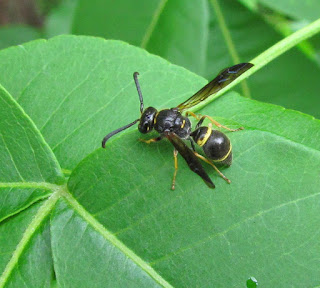 Only females do hunting and nest building. The species ranges throughout the eastern U.S. west to Iowa, Kansas, and Texas. It also occurs in southern Ontario and Quebec, and Prince Edward Island.

The victim: I honestly cannot verify the identity of the caterpillar in this case, but it is certainly a leafroller in the moth family Tortricidae, and *possibly* the species Archips purpurana, which has goldenrod as a known host plant (among several others). 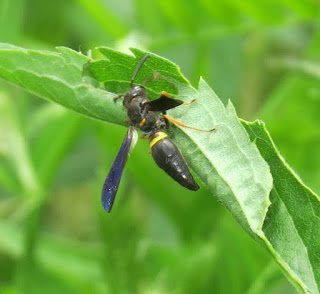 Is it coming out yet?

The wasp did not pursue its prey the way I thought she would. It even took me a minute to ascertain that she was hunting. I figured she would simply tear open the rolled leaf, grab the caterpillar, and go. Apparently the silk-bound fortress is more impregnable than I imagined. 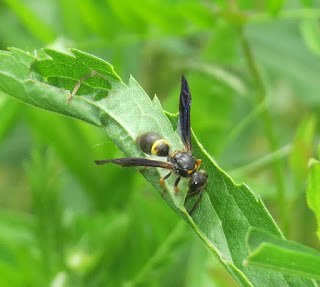 Maybe at this end?

What the wasp did instead was pure genius. She took advantage of the caterpillar's instinct to "eject" when it feels like its home will be compromised. The wasp ran to one end of the leaf roll, then walked back, vibrating her abdomen to entice the moth larva to jetison itself. Back and forth she ran, as this video shows.

Unfortunately, I did not keep the camera running through the entirety of the hunt, partly due to fatigue, but when I saw the wasp suddenly had the caterpillar in her jaws, I resumed the video in time to see her fly to a nearby leaf to finish stinging her prey into paralysis.

Normally, the caterpillar, if threatened, takes a flying leap out of the leaf roll, trailing a silken line that it will then use to climb back once danger has passed. Kind of the caterpillar version of bungy jumping. The wasp obviously exploits this tendency, and very effectively. 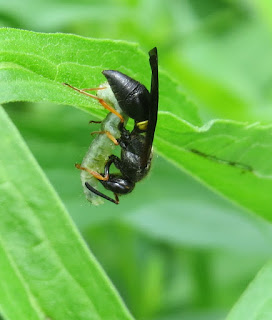 Finishing off her victim with more stings

So, what does the wasp do with the caterpillar? Where does she take it? Adult wasps typically feed on flower nectar, aphid waste ("honeydew"), fermenting tree sap, and/or other liquids high in carbohydrates to fuel their energetic activities, like flying. So, this morsel of protein is not something the wasp would eat. The caterpillar is instead intended for her larval offspring. 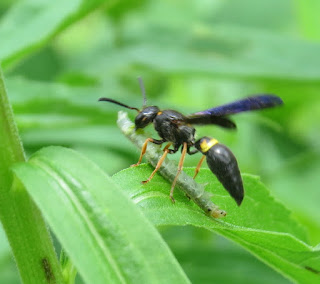 And away she goes!

Ancistrocerus unifasciatus likes to set up house in abandoned mud dauber nests, especially those of Sceliphron caementarium and Trypoxylon politum. The mason wasp caches several paralyzed caterpillars in one of those cells. She lays an egg in the cell, then erects a partition and begins filling another cell along the length of the original, larger cell made by the mud dauber.

The larval wasp that hatches then has a larder of fresh food to feed it. Eventually it spins a silken cocoon, and pupates inside. An adult wasp emerges weeks later and chews through the mud wall to freedom.