Yet another insect species appears to be expanding its range into eastern Colorado. I have recently discovered nests of the Pipe Organ Mud Dauber, Trypoxylon politum, at three locations in the vicinity of Colorado Springs.

This species is common throughout the eastern United States, but was previously known only as far west as Kansas and Nebraska. It is named for the multiple tubular mud columns that comprise its nest, and resemble the pipes on old-fashioned organs. 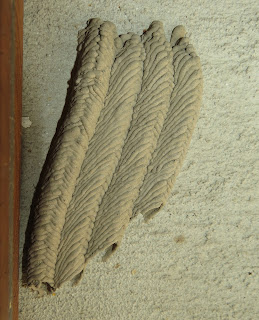 Trypoxylon politum is not related to the familiar Black and Yellow Mud Dauber, or the Blue Mud Dauber, both of which are in the family Sphecidae. The Pipe Organ Mud Dauber is a member of the family Crabronidae, collectively known as "square-headed wasps." This is our only North American member of the "fabricator species group" of Trypoxylon that create free-standing mud nests. Most Trypoxylon species nest in pre-existing cavities such as nail holes, beetle borings in wood, and hollow stems or twigs.

The first evidence I found of this species in Colorado was a pair of nests in the rafters of a large outdoor picnic shelter (ramada) in Bear Creek Regional Park near the foothills of the Front Range in Colorado Springs. That was on July 21, 2015, and I thought it might be a fluke. Maybe one wasp hitched a ride in a nest adhered to an object transported from an eastern state. That is still a likely scenario, but....

My wife then discovered a second nest on the inside wall of a wildlife viewing shelter in Fountain Creek Regional Park, on August 3. The park is located between the towns of Security/Widefield and Fountain, in El Paso County south of Colorado Springs. The longest column in this nest measured at least five inches. You cannot say these wasps lack ambition. One female created this entire nest. 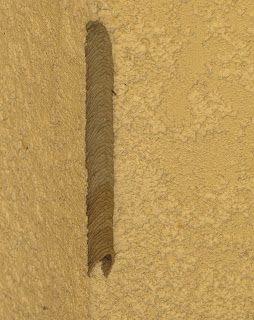 Most recently I discovered a single-column nest on the exterior of the Bear Creek Nature Center, also located in Bear Creek Regional Park, Colorado Springs. That was yesterday, August 13. Well, it was a single-column nest. This morning, August 14, I discovered the female wasp completing a second tube. I managed to get a few grainy images and a couple nice videos, which I am sharing here. 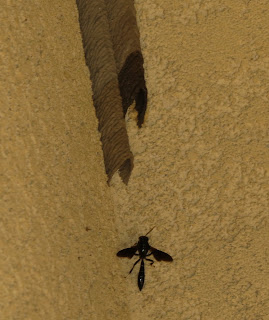 A bit of architectural information. Each tube is partitioned on the inside into several individual "rooms," constructed individually from back to front inside the tube. The female wasp hunts spiders, especially orbweavers, paralyzing them and caching several per cell, laying an egg on the last victim before creating a mud partition and beginning the process again. She continues this until the column is filled.

The column itself resembles braided hair. One ball of mud, carried by the wasp up to the nest, is rolled into a thin half-arc. The next load is used to create the opposing, complimentary half-arc. Watch it happen in this video.

The female wasp works with astonishing speed. She could fly away and return to the nest with another ball of mud in about sixty seconds.

Sometimes, females work in tandem with a male. The male has a spine resembling a fishhook on the underside of the first abdominal segment. It helps anchor him in the nest when he is fending off enemies like parasitic wasps, flies, and other males of his species. The wasp here seemed to be working alone. 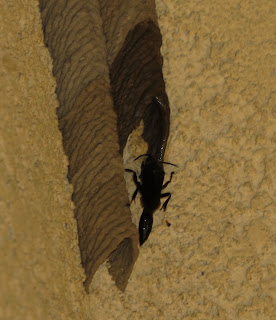 It will be interesting to see how well the Pipe Organ Mud Dauber succeeds here when we already have three species of mud daubers (including the new invasive species Sceliphron curvatum). They all coexist elsewhere, so maybe it will be the spiders that will suffer the most.