Note: I encourage you, my followers, to collaborate with me in telling stories of the insect and arachnid world. If you have images or videos that illustrate arthropods you would like to know more about, please contact me and I will happily create a post around your visuals. BugEric247ATgmailDOTcom. Thank you. 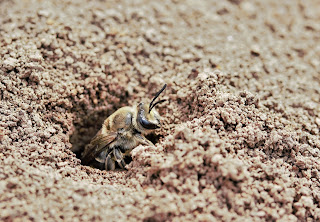 Spring is progressing in fits and starts here on the Front Range in Colorado, but elsewhere flowers are blooming and bees are buzzing. Thanks to Jenny Roberts of Massachusetts, Rhonda Matteson of Indiana, and MaLisa Spring of Ohio sharing their images, I am able to write about one of my favorite insects, the "polyester bees" in the genus Colletes, family Colletidae. 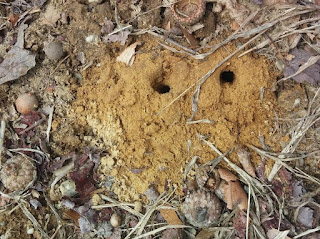 Polyester bees are among the very first solitary bees that one sees in spring, and just about the last to be seen in autumn. While some species are bivoltine, having two generations per calendar year, many are univoltine: there is one generation per year, either in spring or fall.

How did these bees get their name, you may ask. Female solitary bees in many families produce oral and/or abdominal secretions that are useful in waterproofing the underground chambers where their larval offspring develop. Colletes females first lay down a layer of saliva over the walls of a cell, then add a coat of "varnish" from the Dufour's gland in their abdomen. The result is a natural polymer that resembles cellophane. It forms a plastic baggie of sorts that keeps the mostly liquid pollen and nectar supply fresh for the single larva that will feed and grow inside the cell. 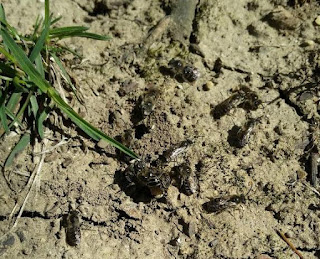 No matter where you live in North America, there are polyester bees to be found. There are 99 known species on our continent, north of Mexico, with the greatest diversity in the desert southwest, followed by the central plains and southern New England.

Colletes are most conspicuous in their nesting grounds. They tend to prefer sandy soil, but even bare patches in lawns will do. Even though each female excavates her own burrow, hundreds, even thousands, of bees may occupy a small area. This gives the impression that they are social, and sometimes causes a panic attack in homeowners who see them as a potential threat. 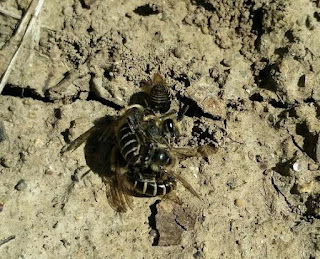 The males literally go where the girls are, so they add to the numbers. The guys are also highly aggressive in pursuing females, creating mating balls like the one captured in pixels by Rhonda (and in Mark Berman's video, link in "Sources"). Males have longer antennae than females, and lack the brush of pollen-collecting hairs (scopa) on each hind leg. Males also land frequently on the ground in nesting areas. The females are too busy going about their business to pause for long, if at all. 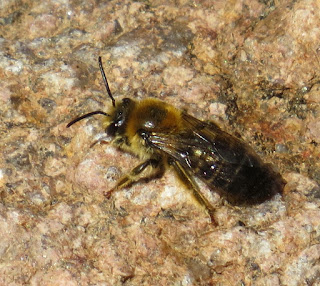 The other likely place you will find these bees is, of course, on flowers. Ironically, on this very day in the year 2000, I collected several specimens that were foraging in the flowers of a redbud tree in Forsyth, Missouri. Many Colletes will take pollen and nectar from a variety of sources ("polylectic"), but an equal number or more are "oligolectic," meaning they are faithful to only a select variety of related flowers (at family- or genus-level of classification). 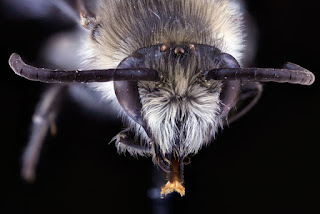 Identifying polyester bees is not terribly easy. They closely resemble mining bees in the genus Andrena, and larger sweat bees in the genera Halictus and Lasioglossum. The conclusive characters needed for a concrete ID are also pretty subtle. Colletes have a forked "tongue," the mouthparts bifurcated at the end. Unless the tongue is extended and visible, though, how would you know? The wing veins are another tell-tale clue. The forewing has three submarginal cells, located beneath the marginal cell that is immediately below the leading edge of the wing. Beneath the submarginal cells are recurrent veins. In Andrena the second recurrent vein is relatively straight, while in Colletes it is distinctly sinuous, or S-shaped. Polyester bees have a heart-shaped face in a head-on view, while mining bees have a more round face. 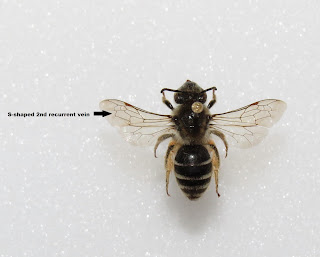 Conservation of pollinators is critical in this day and age, and more people need to know about our native solitary bees. Large aggregations of Colletes may nest in the same place year after year, so it is imperative that homeowners, park managers, and others understand that the bees need to be left in peace. Significant populations can be wiped out in one fell swoop otherwise. 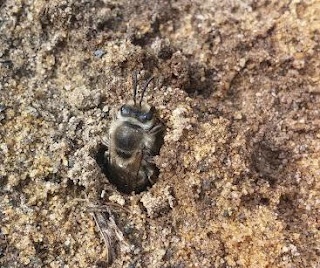 Thanks again to Jenny, Rhonda, and MaLisa for sharing their images. Be sure to check out other online resources to learn more. 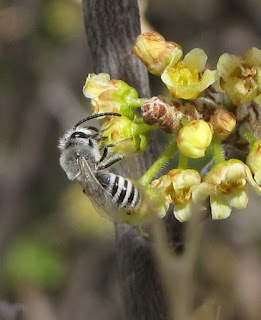