Social media is both a blessing and a curse to entomologists. It can inform and illuminate, but also circulate misinformation and irrationality at light speed. Perhaps nothing better illustrates this dilemma than the proliferation of bee versus wasp memes. 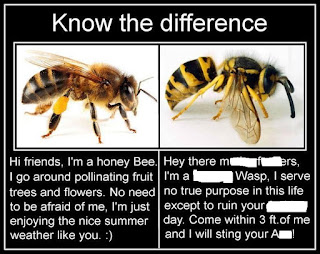 My friend Devon Henderson posted the above meme on Facebook today to solicit reactions from her colleagues in entomology. Note that I have heavily edited the captions to make the meme "family-friendly." The overwhelming consensus was that such simplistic and inciting graphics are more devastating to public education than they even are "amusing" to people who know better. As one respondent replied,

" The fact people keep posting them in naturalist forums (without your critical comment) annoys me, as if everyone will find it hilarious and haven't seen them a thousand times before. People seem very bad at judging audiences. Also, bad language doesn't bother me personally, but it is bad manners to post it on general forums." 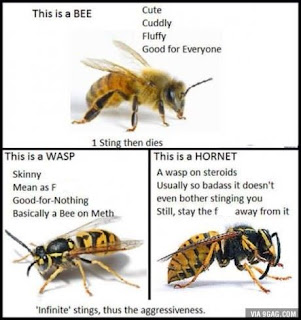 Memes are at best a shortcut to express an opinion. Usually, they are insulting to the subject or hurtful to better-informed members of the intended audience. One respondent to the top meme responded:

" I reali[z]e this is the entomological equivalent of racism: stereotypes, false assumptions on these different species mostly coming out of ignorance and fear. 'Ha ha, wasps are assholes! Ha ha!'" 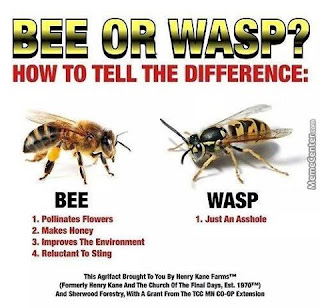 Indeed, one overriding theme in the comment thread of the Facebook post was that people are uneducated enough already, without adding to their false assumptions with such nonsensical memes. Devon comments:

" It bothers me that people actually think that wasps are vindictive and seek people out. They can't rationalize and reason like a human. They act solely on instinct. But people still choose to ignore this fact and continue to accuse wasps of being the 'bad guys.' It's extremely ignorant to assume that a wasp is conscious of its actions and stings people for the sake of unprovoked 'revenge.'" 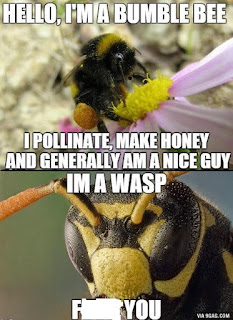 As far as I am concerned, memes like this are the equivalent of war propaganda that dehumanizes the "enemy," and spam that pollutes one's e-mail and social media accounts. Perhaps it is fitting that I am posting this during the U.S. Presidential campaign season, when vitriol is spewing from the mouths of most all of the candidates and their ill-informed supporters. There is little difference between wasps and Republicans if you subscribe to the meme agenda. 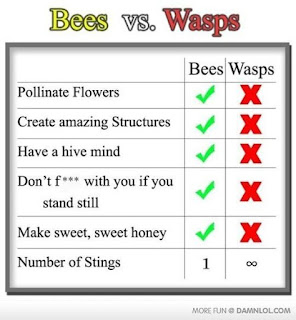 I suppose pest control companies and insecticide manufacturers are in no hurry to discourage anti-wasp memes, but thankfully there are those of us with a good "following" of proactive students of entomology and ecology who are spreading the facts. I have the good folks at Ask an Entomologist for initially posting on this very subject, back in 2014 no less. Even beekeepers like Dave Green recognize wasps have their positive attributes:

"The public is finally beginning to realize how important bees are, as our primary pollinators; the next step is to become aware of how vital the wasps are as our primary pest controls. I judge the health of a garden by the number of paper wasps that are working though the plants hunting (pest) prey."

Maybe we even need to start flooding the internet with our own counterattack of memes, as Joe Ballenger has done. He deftly incorporates wasp biology into his memes making female wasps oddly empathetic to the plight of our struggling American middle class. 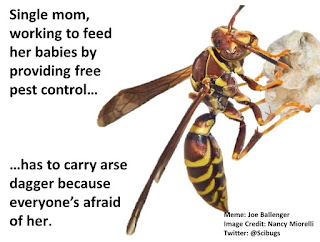 I thank each of you in advance for calling out the idiocy of memes that paint wasps in a villainous light; and who consistently share their own experiences, knowledge, and imagery that demonstrates the positive aspects and fascinating behaviors of wasps. If all else fails, though, I am certain that Devon would gladly permit you to post her own artistic meme in response to the bad ones. 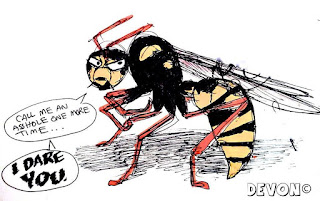