Sometimes you have to literally get down and dirty to find interesting insects. Poking into animal dung, affectionately known as "scat," is a pretty smelly, gross business, but it can yield a diversity of insect life you are unlikely to see otherwise. A case in point came on April 13 when I visited the Bluestem Prairie Open Space along the edge of Johnson Reservoir just southeast of Colorado Springs. 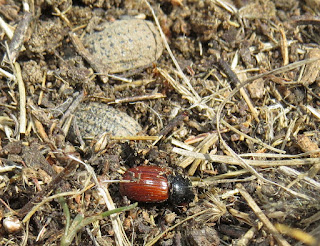 While dogs are not permitted in the area, I suspect the locals probably bring them in anyway, judging by the tracks and the scat I come across. Still, the overwhelmingly most common canines are coyotes, and their dung invariably contains lots of fur from their prey. This makes their excrement attractive to beetles more commonly found on carrion and mummified carcasses. Hide beetles in the family Trogidae normally visit the dried-out remains of an animal body when little is left but skin and bones. Indeed, that is what they eat as adults and larvae, along with feathers, fur, and connective tissue. Apparently coyote dung is the next best thing to a dead body. I found a total of three Trox sp. on just one piece of manure. These beetles are almost invariably caked in gunk so as to be nearly unrecognizable as insects, or animals of any sort, really. When disturbed they go voluntarily comatose, so convincingly that I have given them up for dead, stiff specimens. I've been startled by having them re-animate in a vial or cup after several minutes. 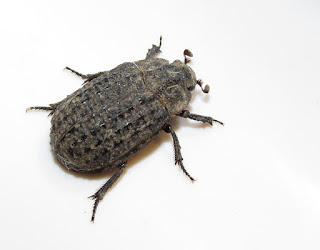 Another surprise on this chunk of poop was a skin beetle, Dermestes fasciatus or D. marmoratus, I am not sure which. Again, these beetles are usually much more common on carcasses in advanced stages of decomposition, including wet bones. 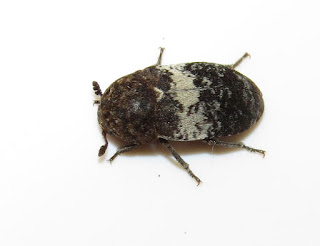 There were, however, some honest-to-goodness dung beetles in another piece of coyote scat that was a little....fresher, if one can apply that term to anything that doesn't smell the part. Aphodius fimetarius is a little red and black dung beetle that was introduced to North America from Europe probably a century or more ago. It is now widespread and common here, usually in cow pats. The larvae live and feed in the manure, then dig into the soil beneath it to pupate. There is probably one generation per year. 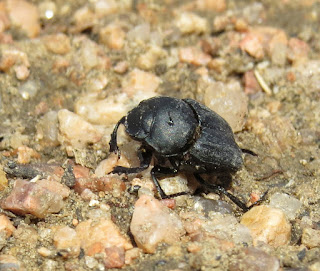 The other dung beetle I found was one of the dung-rollers or "tumblebugs" as they are affectionately called. This species, Canthon simplex, is relatively tiny, adults measuring only 7-8 millimeters. The adults tear off a pea-sized chunk of poo and roll it into a ball, either females alone or in pairs with males. Rolling the ball away minimizes conflict with other dung beetles. Once a suitable site is located, the female buries the "brood ball" and lays a single egg inside. The grub that hatches feeds inside, eventually pupating within the now hollow sphere. 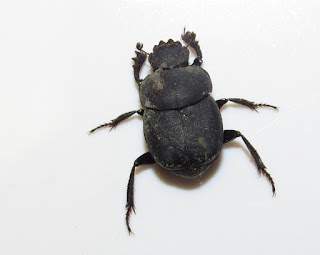 While I was looking for the dung beetles, a very small rove beetle, family Staphylinidae, raced up a grassblade and flew off before I had a chance to secure it. Rove beetles are predators of other insects, and many species visit dung and carrion to feed on fly maggots. Rove beetles are slender, almost serpentine, with shortened wing covers (elytra), and so may be mistaken for earwigs at first glance. Staphylinids are so diverse that identifying them is next to impossible for anyone but an expert; and it also frequently involves detailed examination of the male's genitalia. 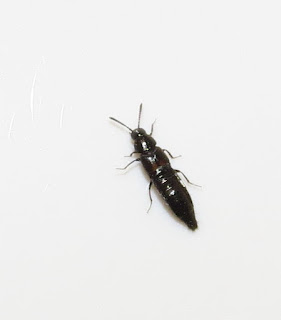 Maybe you are not "into" dung fauna, at least not if it requires pawing through it with or without gloves and/or various instruments. Ok, no one can blame you; but before you dismiss the power of poo altogether, consider my upcoming post "What's on dat scat?" You will be surprised all over again.