If I learned anything at the blacklight in our backyard this year, it was to not ignore the small stuff. Naturally, trying to find statistical documentation of the average length of insects in millimeters, I failed. Surely, the overwhelming majority of insect species measure less than ten millimeters. Heck, entire orders of insects are comprised of species that rarely exceed five millimeters. Lice, booklice, and barklice for example; and fleas as another case in point. 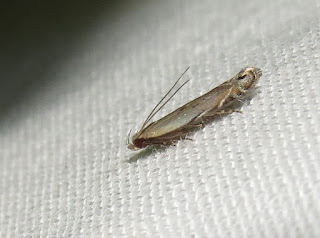 Most of the moths that came to our blacklight were in the category known as "microlepidoptera," and shockingly small compared to what one normally considers moth-like. Some of these insects spend their caterpillar stage mining between the layers of a leaf, boring inside a grass stem, tucked inside a rolled or tied leaf, or otherwise hidden from view in the most unlikely places. 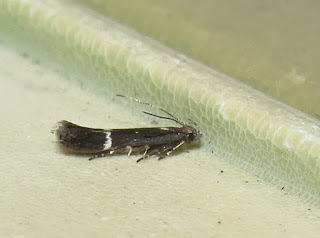 It is a real challenge to photograph microlepidoptera, but well worth the effort. The geographic distribution of many species is largely unknown, and simply turning on your porch light and imaging what alights there can lead to county or even state records. You can post your pictures to any number of forums, Facebook interest groups, or citizen science websites to get the specimens identified....maybe. Many species require dissection of the genitalia to confirm their identity. 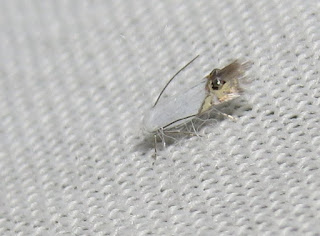 The beauty of the tiny scale-winged creatures boggles the mind. Some have lance-shaped wings with long scales that fringe the tips and make the wings look more like feathers. Some have scales that are so reflective that your camera flash bounces right off and blows out every image. Some have a metallic sheen. A few have false eyespots designed to get potential predators to attack the wrong end of the insect. 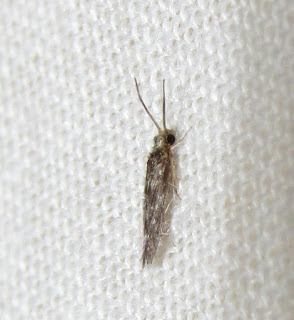 I imaged one impossibly tiny moth that I soon learned was not a moth at all. The microcaddisflies in the family Hydroptilidae are exactly that. They are only 4-5 millimeters from "nose" to wingtip. We don't have any hospitable aquatic habitat within about half a mile of our yard, but caddisflies in general are able fliers, traveling long distances as adult insects. 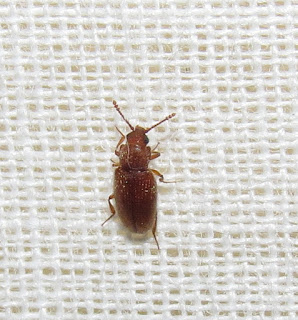 Not to be outdone by moths, beetles can also be tiny. Among the more common species that appeared at our blacklight belonged to families that consist almost entirely of very small members. Minute brown scavenger beetles, family Latridiidae, showed up consistently. So did shining flower beetles in the family Phalacridae. Very small flea beetles in the leaf beetle family Chrysomelidae appeared in fair numbers, too. They often vaulted out of camera range just before I snapped the shutter. 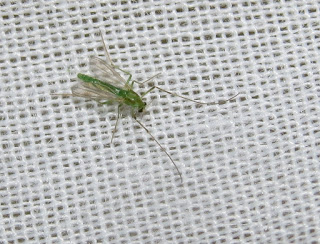 The majority of flies coming to our night light were also miniscule. Dark-winged fungus gnats, family Sciaridae, were most abundant, but a diversity of non-biting midges, family Chironomidae, were omnipresent most nights. 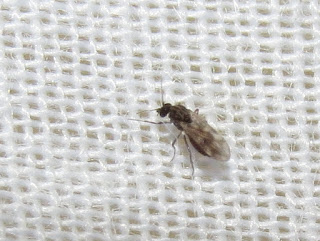 Few biting flies are attracted to lights at night, but we did have a handful of "no-see-ums," biting midges in the family Ceratopogonidae. The majority of these flies actually feed on the blood of other insects rather than vertebrates. 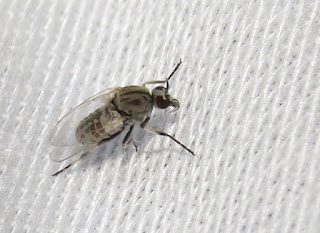 To my surprise, a lone female black fly, family Simuliidae, also came in one night, but none were seen before or since. They are also aquatic in the larval stage, as are mosquitoes, most midges, and no-see-ums.

I am still trying to identify several flies that came in. I did manage to identify to genus one of the ubiquetous gall midges in the family Cecidomyiidae. Lasioptera is a lovely black, gray, and white insect. 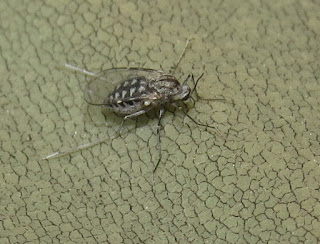 True bugs can also be very small, especially members of the enormous family of plant bugs, the Miridae. I swear, it seemed that no two were alike; and I am not at all certain I'll be able to identify even a fraction of them. Meanwhile, to my delight, a thread-legged assassin bug, Empicoris species, showed up a couple of times, perhaps looking to dine on one of the smaller insects drawn to the ultraviolet light. 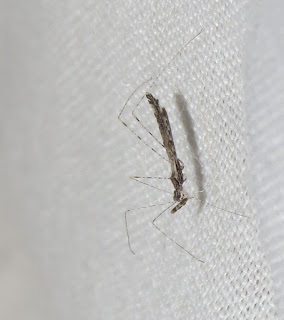 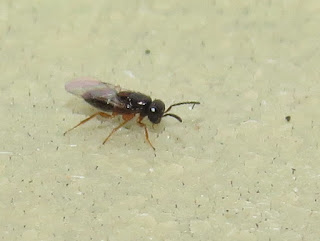 Believe it or not, there are a good number of nocturnal wasps that will come to blacklights. Most of them are parasites of other insects, and constitute what entomologists call "microhymenoptera." Do you detect a theme here? Some of the smallest insects known are "fairy flies" in the wasp family Mymaridae. I did not detect any of those, but considering they can be well under one millimeter, chances are I could not have procured an image anyway. I settled instead for tiny braconid wasps and a handful of other wasps collectively lumped in the superfamily Chalcidoidea. 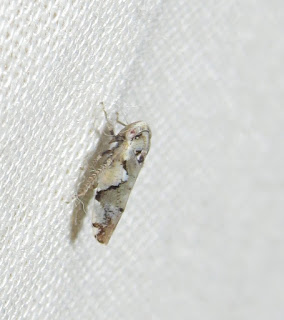 Are you hooked yet on the micro-bugs? For a full spectrum of what I found just at the blacklight, check out my Flickr album for June, and alsoJuly, as well as the one I'm still working on for August through October. 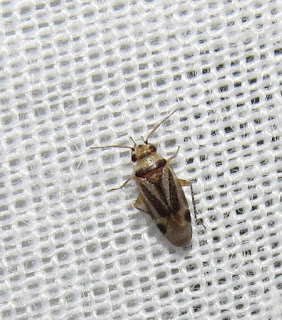 Meanwhile, you might try practicing your imaging skills on dead insects from indoors. Light fixtures tend to accumulate large numbers of small insects, and you might be surprised at what you find. Good luck to you; and remember that myself and others can be found at many online destinations to help you solve your mysteries.