I wrote about this species back in December, 2010 when I had only one image of a sleeping female in South Deerfield, Massachusetts on July 5, 2009. Recently, I had the privilege of imaging another female in Leavenworth, Kansas, on August 24. 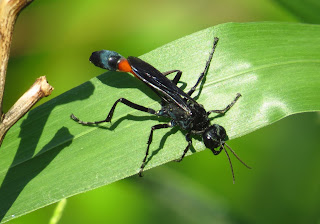 These are large, beautiful insects, velvety gun-metal blue with a red band across the abdomen, and black wings. It can be confused with no other member of the genus Ammophila. This particular specimen spent the night in a patch of weeds and flowering mint, eventually waking up to visit many mint blossoms for nectar. This wasp is known to visit many kinds of flowers, in Illinois at least. I collected one specimen from Swamp Milkweed in Cincinnati, Ohio. 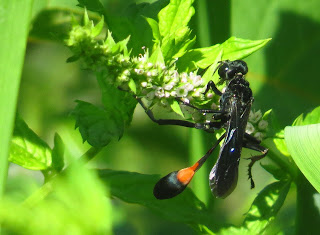 Females need to fuel themselves so as to be able to carry out the tasks of providing for their offspring. Each wasp is solitary, digging her own vertical or angled burrow in clayey or sandy soil, terminating in a horizontal chamber at the bottom. Once the nest is excavated, it is off to find a large caterpillar. Known hosts include the larvae of underwing moths (Catocala spp.), the locust underwing (Euparthenos nubilis), and zale moths (genus Zale). Those are hefty caterpillars, but then they are destined to feed the larva of a very robust wasp. 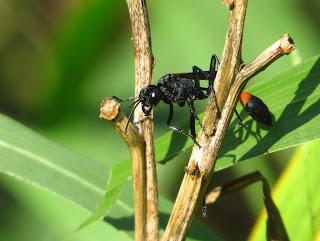 This YouTube video may or may not depict A. nigricans, but the searching behavior must be very similar at the least. The female wasp is not likely to locate a caterpillar based on movement or color, as the caterpillars are very cryptic and usually resting stock still, feeding at night to avoid predators like the wasp. So, she must find her prey by touch. 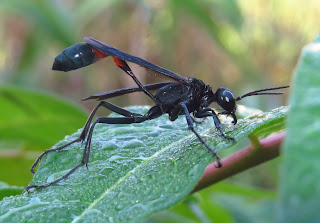 Ammophila nigricans ranges over the entire eastern United States, from Kansas and Texas to New England, and south to Georgia, Florida, and Louisiana. It does not appear to be nearly as common as most other members of its genus, so I consider myself lucky to have had a few hours observing this one specimen.