A person on a Facebook insect identification group recently asked a very good question about the difference between a grasshopper and a locust. You would think it is pretty straightforward, but not so fast. 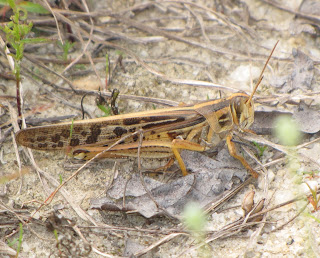 The American Bird Grasshopper, Schistocerca americana, is related to some grasshopper species in Europe and Africa that can become locusts; and it sometimes migrates beyond its usual geographic range in the U.S.

Most of us think of locusts in the context of Biblical plagues in Africa and parts of Europe, in ancient times. Such plagues still happen, and they are almost apocalyptic in their destructiveness. They even occur in North America on occasion, as well as other parts of the world, so there must be more than one species of locust, right? Yes, and no. 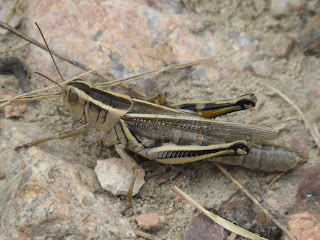 Two-striped Grasshopper, Melanoplus bivittatus, has been overwhelmingly abundant in recent years along the Colorado Front Range

Locusts are not a species of grasshopper, they are the result of overcrowding in the nymph stage of many kinds of grasshoppers. Under favorable conditions, there is an extraordinary survival rate of young grasshoppers, which are called nymphs. When they are literally so abundant and concentrated that they are rubbing elbows (well, "knees" is probably a more appropriate term), this friction causes them to detour from their normal route of metamorphosis.

Instead of maturing into the usual grasshopper, the adult stage features longer wings and other body modifications that permit them to fly greater distances, remain airborne for longer periods, and to undertake these migrations from one food source to the next over long distances. They also may be aided by winds ahead of storm fronts. 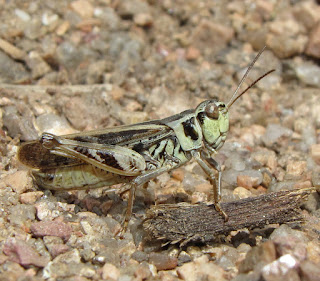 The Clear-winged Grasshopper, Camnula pellucida, is prone to population outbreaks in the American West

This is something of a simplification of the physiology of locusts versus normal grasshoppers, but a surprising number of species have the potential to morph into locusts when conditions are right. Then they overwhelm the landscape, defoliating every plant in their path.

Locust swarms will devour plants they would not normally eat. I recall a presentation about a locust epidemic in Oregon where the scientist showed slides of juniper trees (yes, juniper trees) that had been reduced to skeletons by grasshopper swarms. The locusts have even been known to eat garments on clotheslines. Grasshoppers are also omnivores, and will not hesitate to eat dead members of their own species, or gnaw on injured or even healthy ones. It is late in grasshopper season here now in Colorado, and I regularly see grasshoppers with wings reduced to stubs thanks to hungry comrades. 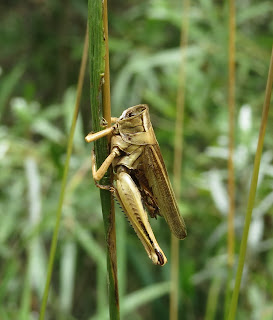 A victim of the grasshopper-killing fungus Entomophaga grylli

Fortunately, for us at least, grasshoppers face many mortality factors. While it has been a banner year for grasshoppers this year along the Colorado Front Range, huge numbers have succumbed to the entomopathic fungus Entomophaga grylli. The insidious fungus grows inside the insect, eventually commandeering its brain and forcing it to behave abnormally. The grasshopper, through no will of its own, climbs to the top of a tall weed, assumes a death grip embracing the stem, and dies. The fungal spores then erupt and rain down on healthy grasshoppers below to begin the cycle again. The spores may even decapitate the dead grasshopper as they exit.

Grasshoppers are the chief grazers of the prairie, even more impactful than livestock, deer, pronghorn, elk, and bison. Natural rangeland can usually withstand their feeding, but ranchers obviously see them as competition and exercise chemical controls when necessary. Since grasshoppers are mostly generalist feeders (a few specialize on only certain broadleaved plants), they pose a threat to agricultural crops, too. 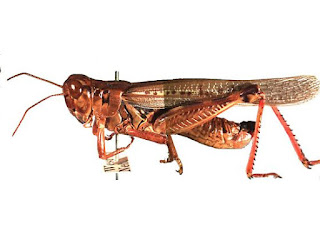 A specimen of the extinct Rocky Mountain Locust
© Bugguide.net

Ironically, the Rocky Mountain Locust, Melanoplus spretus, once the most abundant and devastaging insect pests ever to occur in North America, is now extinct. The book Locust, by Jeffrey A. Lockwood, chronicles the rise and dramatic fall of the species, which ultimately vanished from the U.S. landscape by the early 1900s. I will not spoil the solving of the mystery, as Lockwood's account is far more riveting than anything I could craft if I was even prone to writing historical fiction. Let us just say it is a cautionary tale. We can certainly be grateful that we seldom experience such traumatic explosions of grasshoppers here on American soil, but we should be empathetic to other nations that do. Entire economies can be on the verge of collapse in the wake of such devastation.