I never expect to encounter wasps in the middle of December, but then I also don’t go out looking for them at that time of year. A trip to the Sabino Canyon Recreation Area north of Tucson on December 19 has me re-thinking that assumption. I was surprised by the number and diversity of wasps I saw. Among the more interesting was an ichneumon wasp I later identified as belonging to the genus Chirotica. 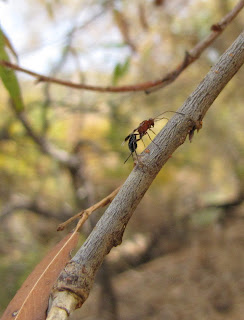 Fred Heath, a volunteer naturalist at Sabino Canyon, had invited me along for a short hike in the late morning and early afternoon. He knows the area very well and was able to point out everything from plants to puffballs. On a willow tree full of bagworms (moth family Psychidae), a flash of movement caught my eye. A very elegant-looking ichneumon wasp was exploring one of the branches of the willow.

Ichneumons are notoriously quick to fly at the slightest movement, so I did not expect this wasp to stick around. Much to my surprise it simply continued its searching behavior, allowing me a couple images with my camera before it departed. What was this female looking for? 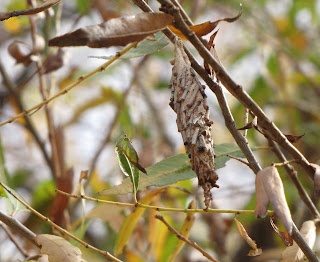 It turns out that the four North American species of Chirotica are parasites of….bagworms! It all made sense, and a series of images on the website Bugguide.net even show one of these wasps investigating a bagworm cocoon.

The “stinger” on my specimen is actually the female’s egg-laying organ, called an ovipositor. She does not use this structure as a weapon in self-defense and so is harmless to inquisitive people like me. Not that I could have caught her by hand anyway. 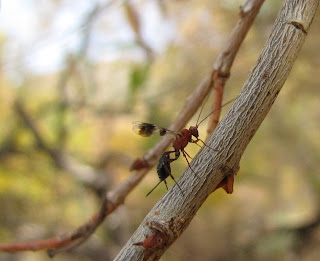 Anyone with an infestation of bagworms would likely welcome more of these wasps, but I honestly have no idea just how common (or scarce) they are. You can learn about the known distribution of our four species by using the Database of Hymenoptera in America North of Mexico. Bob Carlson, an expert on ichneumon wasps who is now retired from the National Museum of Natural History (Smithsonian) put together that part of the database.

Ichneumons are among the most diverse group of insects on the planet, so even an “armchair entomologist” can make significant contributions to science by documenting specimens through collection and imaging, but especially through rearing the wasps from host insects like butterfly and moth caterpillars.