Sawflies are about as un-waspish as wasps can get. They don’t have a narrow “wasp waist,” the abdomen being attached broadly to the thorax. The females don’t sting. Their larvae are vegetarians instead of carnivores. They are rather soft-bodied and delicate. They are, however, very abundant at certain times of the year. 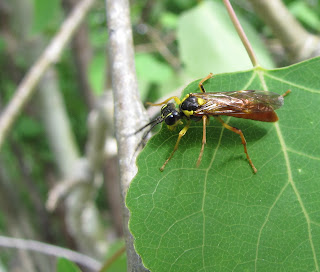 The specimen depicted above was identified as a male in the genus Tenthredo, family Tenthredinidae, by Dr. David R. Smith, a world authority on the broader group to which sawflies, horntails, and related primitive wasps belong: the Symphyta. The image was taken near the summit of Mt. Lemmon in the Santa Catalina Mountains of southern Arizona on an aspen leaf, June 12, 2010.

The genus Tenthredo includes approximately 118 species in the U.S. and Canada. The adult wasps are often seen on flowers, but they will eat smaller insects as well as pollen and nectar. Many species mimic stinging wasps like yellowjackets and spider wasps, but the females have no stinger. They retain an egg-laying organ called an ovipositor, modified into a saw-like blade used to insert eggs into plant tissues.

Larvae of sawflies in general are frequently mistaken for caterpillars, and indeed most behave in that manner: they feed on foliage just like a lepidopteran larva. How do you tell them apart then? Caterpillars have only five pairs of prolegs (those fleshy knobs down the length of their bodies that they use like suction cups to grip vegetation) or fewer, while sawfly larvae have seven pairs of prolegs. The larva shown below is typical of sawfly larvae, though it may not be a member of the genus Tenthredo. The image was taken September 6, 2009 at Knightville Dam in western Massachusetts. 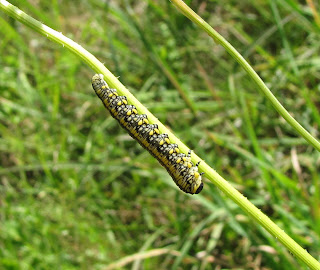 Adult sawflies have fairly complex wing venation that gives the wings a reticulated appearance. The common sawflies in the Tenthredinidae family have triangular faces, with slightly bulging eyes, as seen in the image below, also taken at Knightville Dam. 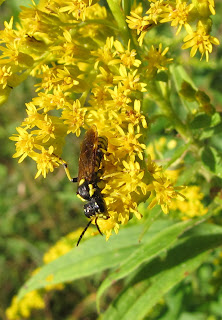 Look for sawflies mostly in the spring, especially at the edges of deciduous forests. Those in the genus Tenthredo actually tend to appear later, in the late summer and early autumn. Watch for larvae in groups feeding on leaves. Watch this space for more on other kinds of sawflies as I encounter them afield.