How can you not like a wasp whose life cycle involves killing cockroaches…slowly? Meet the cockroach wasp, Ampulex canaliculata. These diminutive wasps were once considered primitive members of the family Sphecidae, but are now placed in their own family, the Ampulicidae. There are six genera in the family, but only Ampulex occurs in North America. 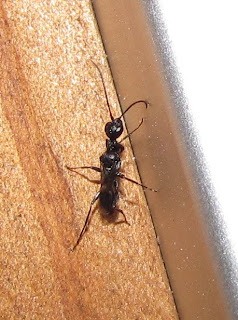 Cockroach wasps have been considered relatively uncommon, but mostly they are overlooked. A. canaliculata is small, only 10-12 millimeters or so, and looks much more like an ant than a wasp. Their wings, which appear too short for their body, are spotted in a pattern that intensifies their ant mimicry. Indeed, while they can fly, they are much more likely to be seen running up and down the trunks of trees in search of their cockroach prey. I found them to be reasonably abundant in Cincinnati, Ohio, but I looked at lots of tree trunks.

What does the female wasp do when she finds a cockroach? She uses her mandibles and clypeus (“upper lip”) like a clamp, grasping the edge of the roach’s pronotal shield while curling her abdomen beneath the roach, stinging it in a nerve center located on the ventral side of its thorax. The effect of the sting slows down the roach and it loses its “flight” reflex. The roach is very much alive, but unable to flee. The wasp takes advantage of this. Gripping the roach’s antennae in her jaws like a pair of reins, she walks backwards, leading the roach to some pre-existing cavity where she will lay an egg on it and entomb it. The cockroach essentially cooperates in its own transport, saving the wasp the labor of dragging a limp, heavy body around. It is an ingenious strategy, if not downright diabolical. The wasp sometimes amputates the roach’s long antennae to better facilitate her control over her victim.

The wasp larva that hatches from the egg consumes the weakly paralyzed roach, eventually pupating and then emerging as an adult wasp. The favored cockroach prey are wood cockroaches in the genus Parcoblatta which are common in deciduous forests.

There are two species of Ampulex in North America. A. canaliculata is widespread in the eastern U.S. west to Wisconsin, Missouri, and Kansas. A. ferruginea is recorded only from Florida and Texas. Much better images than mine can be had at Bugguide.net.

Interestingly, not all ampulicids are small and drab. The “Emerald Cockroach Wasp,” Ampulex compressa, is a jolly, metallic green giant that hunts the American Cockroach (Periplaneta Americana) in many parts of the world, including the Ethiopian and Oriental regions, Australia, and various islands including Hawaii. Also known as the “jewel wasp,” its antics have also been captured in several YouTube videos.

We were fortunate to have had an energetic specimen of this species at the Cincinnati Zoo and Botanical Garden when I worked there in the late 1980s. It had free run of a large cage with gravel in the bottom and a cardboard toilet paper roll to hide in. We introduced a roach and it went to work, eventually caching the roach in the toilet paper roll and plugging it with heaps of gravel it piled stone-by-stone in the open end. 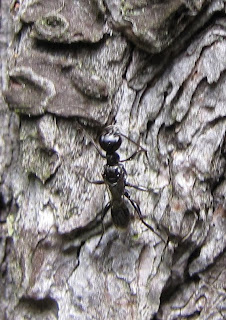 Look for our domestic species this spring, running on the trunks of dead standing trees in particular, as those old snags are also frequented by the wood cockroaches. You might even see one dragging its “zombie” prey. Happy hunting!