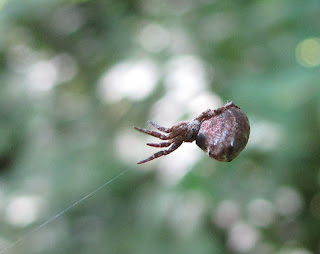 Triangle spiders belong to the genus Hyptiotes (pronounced Hip-tee-OH-teez) in the obscure family Uloboridae. They are part of a larger group of arachnids called “cribellate spiders.” Cribellate spiders all share one feature in common: an extra spinning organ called a cribellum, located adjacent to the normal group of spinnerets. The cribellum issues a special type of silk that the spider literally “fluffs up” using a comb-like organ called a calamistrum, located on each hind leg.

Perhaps even more amazing than the “accessories” that uloborids have is what they lack. These are the only spiders in North America that do not have venom glands. That’s right, they are non-venomous spiders. So, you ask, how then do they subdue their prey? That is a great question for which I have not the foggiest answer. They probably do an extra-good job of wrapping their prey in silk, but not just any silk.

There are four species of Hyptiotes in North America, three of which are chiefly western in their geographic distribution. The one shown in the image here is Hyptiotes cavatus, the sole eastern species.

Keep a sharp eye out for triangle spiders. The webs are mostly built about waist-high in weeds, on bridges and other structures, and twigs of trees and shrubs.