In my three weeks as a new resident of Colorado Springs, I haven’t seen that many spiders, let alone orb weavers. I look up for the webs, but sometimes forget to look down. Some of our most spectacular orb weavers, in the genus Argiope, usually build their spiral snares close to the ground amid tangled weeds and other vegetation. It was by chance and the angle of sunlight that I spotted the webs of two Banded Argiope spiders, Argiope trifasciata, yesterday. 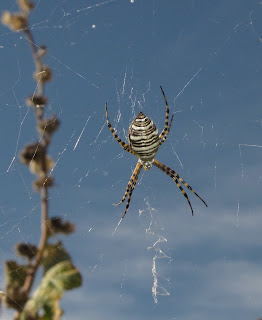 This spider is common over the entire United States, and warmer regions of the globe, though it is reportedly rare in southern Europe. Here in North America, adult specimens can be found deep into autumn. According to a fact sheet on this species from Penn State University, A. trifasciata has a strategy for enduring the cooler fall temperatures: The spiders orient their webs east to west, with the animal itself hanging head down in the center of the web. The ventral surface of the spider’s body, largely black in color (see the image below), 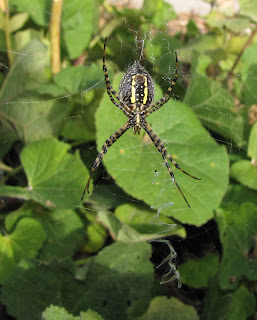 faces south, catching the sun’s warming rays. Studies also indicate that these orb weavers could easily overheat during the late summer (Tolbert, 1979; Ramirez, et al, 2003), so the webs are then oriented to reduce the spider’s exposure to full sun. The spiders even “obelisk” to a degree, tilting their abdomen away from the web surface to minimize or maximize exposure to the sun. The dorsal surface of this species is highly reflective, mostly silver in color with darker bands across the abdomen. Specimens vary considerably in the degree of banding, and just how dark those bands can be. Additionally, an inverted trident pattern is often visible on the top of the abdomen, the “tines” directed toward the rear of the arachnid.

The females are large arachnids, mature specimens ranging in body length from 15-25 millimeters. Males, on the other hand, are petite, only 4-5.5 millimeters. 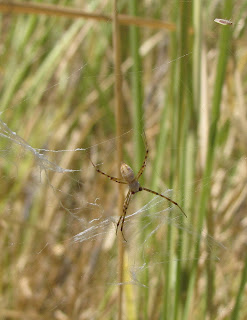 Females fashion an egg sac shaped like a kettledrum, flat on the upper surface and highly convex otherwise. The tough, papery silk on the exterior of the egg sac helps camouflage the package amid the dry, dead autumn weeds. 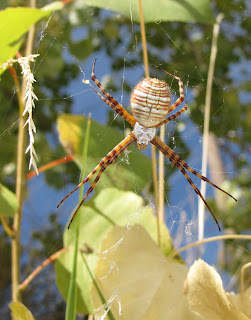 I find this spider to be strikingly beautiful. I can still recall the first one I saw as a child in Portland, Oregon. She had her web amid an ornamental, low-growing juniper along the steps to our front door. I could visit her every day once I knew where to look. My friend and mentor, naturalist Jim Anderson, was the one who helped me identify her as I remember.

Such can be the positive power of nature’s cryptic beauty if you are not prone to arachnophobia. There is really no substitute for getting out from behind the computer screen, television, or even the book or magazine and going exploring outside your home. Your very backyard can hold amazing surprises to rival the most exotic creatures of the Amazon. 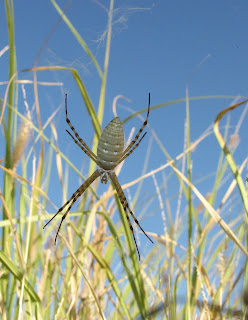