Here in the western United States, one of the most common orb weavers is the Cat-faced Spider, Araneus gemmoides. I do not find them to be that conspicuous, however, because the spiders hide in their retreats by day, emerging only at night to sit in the hub of their spiral snares. 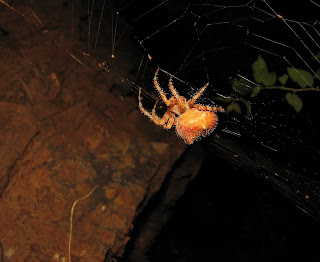 This species is known in parts of Canada as the “Jewel Spider,” but its more common name of “Cat-faced Spider” is more descriptive. Araneus gemmoides is one of the angulate orb weavers that often sport a pair of conical humps near the front of the top of the abdomen. These “horns” mark the “ears” of the cat face, with variable markings on the abdomen reinforcing the feline moniker.

One variation, the “Cheshire Cat-faced Spider,” has only a smiley-face….Ok, I’m making things up now, but the pattern of markings is highly variable in this species. One reasonably consistent mark is a short, white vertical stripe on the front edge of the abdomen, usually crossed by two white chevrons. 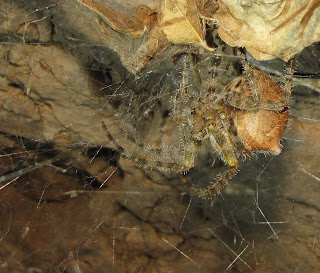 Mature females are large spiders, especially when gravid, their abdomen full of eggs. They vary in body length from 13-25 mm. Males, in contrast, are a mere 5-8 mm as adults.

Cat-faced Spiders spin rather small webs in proportion to their body size, the prey-catching zone spanning maybe one foot or so, even if the foundation lines of the snare may stretch several feet between anchor points. The occupant invariably sequesters herself in a curled leaf or other retreat by day, sometimes still monitoring the web via a signal line running from her retreat to the hub. 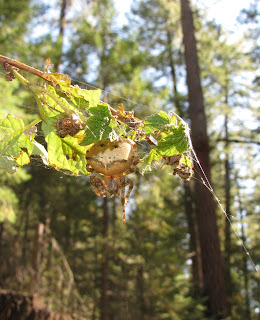 As darkness falls, the spider emerges to repair its web, or simply spin a new one, after which she may settle in the center of the web, head down, to await potential prey.

In optimal situations, several individual spiders may spin their webs in close proximity. My friend Margarethe Brummermann showed me a small group of these spiders that occupied a cliff face in Peppersauce Canyon on the north side of the Santa Catalina Mountains in southern Arizona. Much attention is paid to the fact that A. gemmoides will spin its webs on or about homes and other buildings, but they are likely taking advantage of outdoor lighting that attracts large numbers of insects within range of their webs. 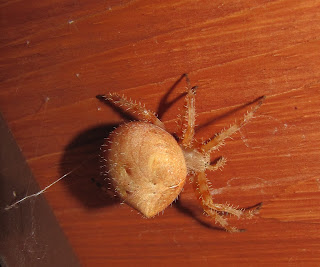 Females apparently spin only one egg sac in late autumn. The spiderlings emerge the following spring and disperse. Young spiders have exaggerated humps on their abdomen, like the one shown below. Perhaps they have to “grow into them.” 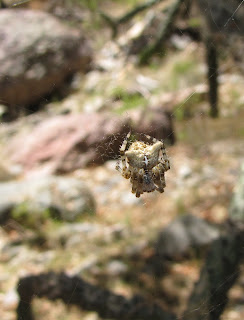 The Cat-faced Spider ranges from British Columbia and Saskatchewan east to Michigan and south through the Dakotas, Rocky Mountains, and Pacific states to Arizona. Look for mature individuals in late summer and throughout the fall.