Here in central Colorado we are experiencing higher-than-normal autumn temperatures. Several record highs were broken Monday, October 24, 2011 in fact. The warmth has meant that most of the social wasps are still active. Among the most common of those is the Western Paper Wasp, Mischocyttarus flavitarsis. This insect can easily be mistaken for a species of Polistes, but Mischocyttarus has a petiolate (stalked) abdomen in contrast to the more sessile abdomen of Polistes. 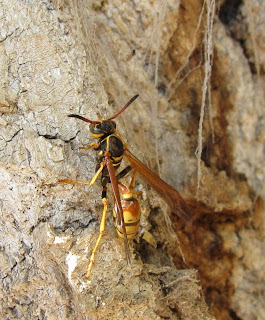 Mischocyttarus is a genus of roughly 260 species that is most diverse in the neotropics of Central and South America. Their classification has presented something of a nightmare to entomologists and it seems the end is nowhere in sight. Currently, there are three recognized species that make into the United States and southwest Canada, all in the subgenus Phi. Here in the western U.S., only M. flavitarsis occurs, but it ranges from British Columbia to Mexico, east to Nebraska and west Texas. I have encountered the subspecies M. f. navajo in Arizona (see image below), which is also found in Mexico. 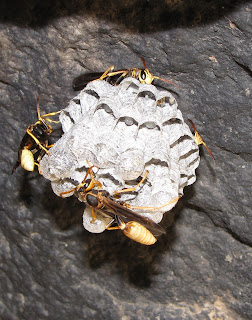 This genus constructs small, uncovered paper combs essentially identical to the nests of Polistes paper wasps. My personal observations of M. flavitarsis flavitarsis in Portland, Oregon have demonstrated that the wasps prefer to nest in cavities. This may be in response to the rainy climate there, and/or offer greater protection from birds. Avian predation is a chief mortality factor for larvae and pupae of other species in the genus (Hermann & Chao, 1984). Certainly, nests I have found elsewhere have been more exposed, such as the M. mexicanus mexicanus nest imaged below at Resaca de la Palma State Park near Brownsville, Texas. 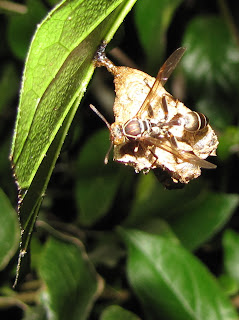 Like other paper wasps, Mischocyttarus females prey primarily on caterpillars to take back to the nest and feed their larval siblings. A study of M. flavitarsis demonstrated that the wasps rely mostly on olfactory cues for detecting prey. They may home in on volatile chemicals secreted by plants in the wake of damage from caterpillars, and especially the odor of the droppings or “frass” left behind by feeding caterpillars (McPheron & Mills, 2007). 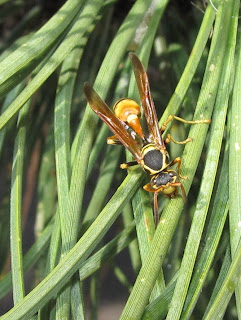 The adult wasps themselves frequently seek out colonies of aphids to sip the sugary “honeydew” secreted as a waste product by the aphids. You may find an abundance of wasps, flies, and other insects around deciduous trees, and even pine trees that are infested with aphids.

Male behavior is geared to finding mates. A study of M. flavitarsis navajo in Arizona revealed that in late summer, males “patrol” areas frequented by females. Riparian corridors are a typical location for this activity. Each male will stop frequently to scent-mark twigs, foliage, and other objects with a chemical secreted by his abdomen. The male vigorously defends his marked patches from competing males. 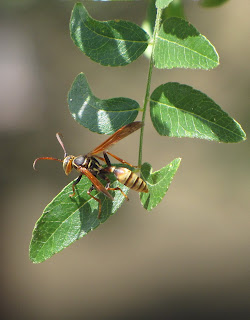 Males that emerge in the fall form leks near potential hibernation sites. A lek is a stage where males congregate to show off to females. In this instance, each male simply scent-marks a perimeter roughly ten centimeters in diameter and sticks to this territory. Incoming females are free to choose (or reject) any male without interference from other males.

At this time of year, females of Mischocyttarus are seeking places to hibernate. Males may seek shelter as well, but they are unlikely to survive until the following spring. The females may spend the colder months under rocks, logs, under loose bark on trees, in the attics of homes, or other protected niches. They can congregate peacefully with others of their kind, and even with Polistes paper wasps. Warm winter days may find the wasps emerging to bask and explore their immediate surroundings.

Mischocyttarus is one of many social wasps that can be observed even at fairly close range without interfering with their behavior or eliciting an attack response. Take time to get to know them. You might learn something that nobody else has yet seen. 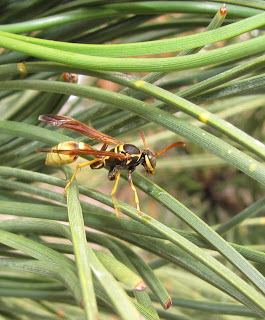