Among the last insects to be seen or heard before the hard frosts of late autumn are grasshoppers. Diversity of the short-horned grasshoppers in the family Acrididae is especially great in the desert southwest and the Great Plains. Here in central Colorado, we have plenty of representatives from both of those areas, convening here on the Front Range.

I have only been here since October third, and I’ve already tallied 25 species, thanks to help from David J. Ferguson via Bugguide.net. Here is the list: 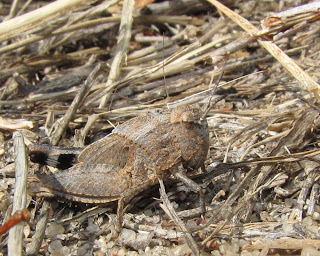 Here in Colorado Springs, I’ve encountered 20 species. Different habitats, elevations, and micro-climates have their own unique fauna. The Two-striped Mermiria (below), for example, was found along the Arkansas River in Cañon City. These large slant-faced grasshoppers are more fond of riparian corridors with tall, thick grass.

Hayden’s Grasshopper and the Wyoming Toothpick Grasshopper were both seen in very short grass at Fountain Creek Regional Park, in a field just in front of the nature center.

At higher elevations, one can find the Wrangler Grasshopper, Circotettix rabula. These insects can sustain their noisy flights for many seconds, in contrast to most other grasshoppers. They frequent steep slopes with scree (broken rock fragments), however, so it is a dangerous challenge to get images of them. The image below came from Emerald Valley back in July, when I could shoot from a trail above the insect. 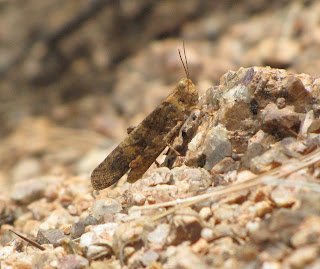 The cooler temperatures of autumn mean that grasshoppers struggle to keep warm. Many of them adopt "basking" postures like the Carolina grasshopper pictured below. The insect literally leans back to expose one side of its body fully to the sun. It even lowers its hind leg so as not to block heat from reaching its abdomen. 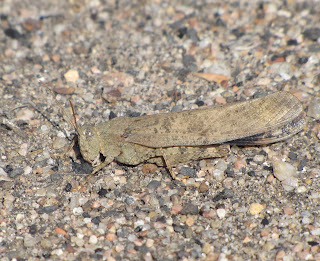 You can find images of most of the above species in my “grasshoppers” set on Flickr.com. I’m already looking forward to next spring, when some of the nymphs will be large, colorful adult insects. I’ll bring you the results then, too.