You can often get a clue as to the identity of a wasp by noting what kind of prey she is toting. Ok, so this only works with female wasps, and it is largely a matter of luck to catch one in the act of subduing or transporting prey. Still, if you see a little (6-7 mm) black and yellow wasp in possession of a plant bug in the family Miridae, it is probably Anacrabro ocellatus, in North America anyway. 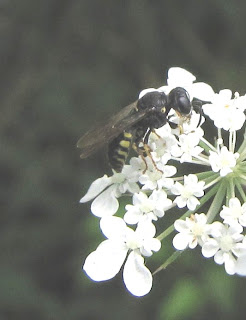 The funny thing about the image above is that until I uploaded it to my computer and cropped it, I thought the subject was a yellow-faced *bee* in the genus Hylaeus. I shot this by the Campus Pond on the University of Massachusetts campus in Amherst on August 6, 2009.

Anacrabro is a genus with two species north of Mexico. A. ocellatus, with two subspecies, is widespread east of the Rocky Mountains. A. boerhaviae is recorded in the extreme southwestern U.S. and in Mexico.

Most of the other genera in the tribe Crabronini, family Crabronidae, are fly-killers that use species of the order Diptera as food for their offspring. By contrast, Anacrabro seeks plant bugs in the family Miridae, order Hemiptera. Specifically, A. ocellatus hunts almost exclusively for adults of the “Tarnished Plant Bug,” Lygus lineolaris, pictured below. 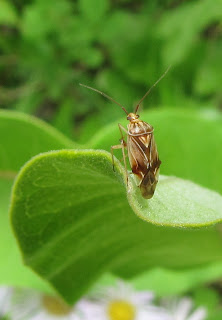 Tarnished Plant Bugs are certifiable pests. They are generalist feeders that afflict over half of all cultivated plant species in the continental U.S. Substantial numbers of them can certainly cause severe damage to crops and garden plants. Thank goodness the wasp likes to stock them in the larder for her brood.

Anacrabro ocellatus is a “fossorial” wasp, meaning that the female digs a burrow in the soil for her nest. Each wasp digs a nearly vertical tunnel 9-16 centimeters deep, though the shaft may wind or loop in hard-packed soil. Short side tunnels may be present half-way down, but more typically longer side burrows diverge in various directions near the bottom of the main tunnel. Very short passages radiate from these longer side tunnels, each terminating in a single cell. It is into these chambers that 4-9 prey bugs are placed as food for a single wasp larva per cell. Each nest has from one to ten or so cells. Do the math and that makes Anacrabro a pretty heroic pest control species. Females may construct more than one nest, too.

Studies have shown that this wasp suffers relatively little from nest parasites, though in some instances the contents of the subterranean cells were preyed upon by ants. The nest entrance is often concealed by overhanging weedy vegetation, and the female wasp takes pains to disperse the excavated soil, so perhaps such strategies pay off in reduced incidences of parasitism.

Between hunting and nest-digging, females refresh themselves on flower nectar, especially at the umbels of wild carrot (aka “Queen Anne’s Lace,” Daucus carrota). They also visit goldenrod (Solidago), milkweed (Asclepias), and other flowers. That is where you are most likely to encounter them. 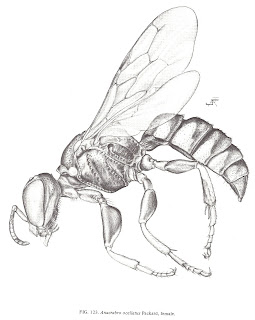 Besides its prey preferences, Anacrabro can be separated from very similar-looking wasps such as Ectemnius, Lestica, and Crabro by the very concave underside of the abdomen.