One of the more common and distinctive members of the family Gnaphosidae is the Eastern Parson Spider, Herpyllus ecclesiasticus. It gets its common name from the black and white color pattern that is reminiscent of the garb worn by old-time clergymen. It also sometimes makes house calls, which can be disconcerting to homeowners. 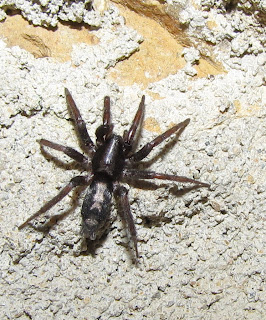 This species prowls mostly at night, and I find it fairly commonly around buildings, hoping to prey on small insects attracted to outdoor lights. It climbs well, so can be seen well off the ground.

By day, it hides under loose bark, or stones, boards, and other debris on the ground. Specimens that enter homes at night may seek refuge in clothing, shoes, and other objects. The spider may bite if trapped, but the effect of a bite depends mostly on the victim’s immune response. Rarely do symptoms exceed mild inflammation.

This is a mid-size spider, females ranging from 6.5-13 millimeters in body length. Males are 4.5-6.5 millimeters. The spinnerets are prominent in both genders, a characteristic of the family Gnaphosidae. Each spinneret is like a showerhead, with many tiny orifices through which silk is extruded. 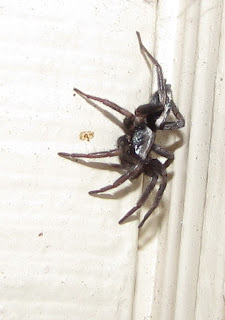 Mature specimens of this spider can be found year-round, suggesting it is fairly long-lived. Mated females spin an egg sac in autumn. The case is flat, and deposited in a silken retreat where the mother guards it. One egg sac in Connecticut, found under loose bark, contained 130 spiderlings. 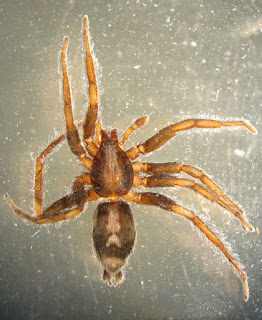