Not all wasps sting, and not all feed on other insects in their youth. The larvae of sawflies are vegetarians, and many are mistaken for caterpillars. You need not venture far to find sawflies, either. I found the adult female specimen below in my own backyard on the evening of September 18. Through a little detective work I discovered she is a Purslane Sawfly, Schizocerella pilicornis, in the family Argidae. 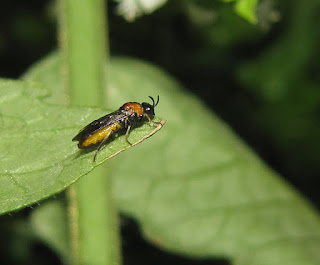 This species is unique among all argids (worldwide) in that its larvae feed internally on the host plant, mining inside the leaves of purslane. Until recently, it was thought that some larvae of S. pilicornis feed externally. Analysis of mitochondrial DNA has demonstrated that those leaf-nibbling larvae belong to a separate species, S. lineata (Hartsough, et al., 2007).

Adult females can be distinguished by the amount of black markings on the top of the otherwise red (or orange) thorax. Females of S. pilicornis have a solid, or nearly solid, black stripe down the center of the thorax, constricted in the middle. Females of S. lineate have very reduced black markings along the midline of the thorax. S. lineate is also slightly larger, females averaging about 7 millimeters to the 5-6 millimeter length of female S. pilicornis. 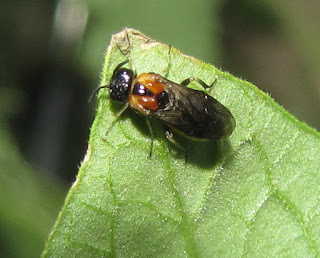 Life history information may be open to debate since it comes prior to the realization that two species are involved (Gorske, et al., 1977). Females lay one egg per leaf, inserting the ovum into the foliage with the saw-like ovipositor that gives sawflies their common name. Larvae feed for roughly six days, going through five instars (an instar is the interval between molts). Mature larvae tunnel into the soil to a depth of about 3.5 centimeters where they pupate. Adults emerge a week later (during the summer generations; otherwise they overwinter as pupae). Their lifespan as adults is apparently very short, only 24 hours according to one source (Gorske & Hopen, 1976).

There can be up to six or seven generations annually, at least in Illinois, where these insects exert a small degree of biological control against purslane. 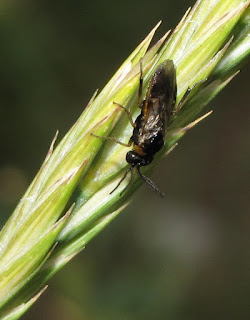 Males in this genus are easily identified by the last antennal segment, which is forked. It looks like the insect has four antennae instead of the two it should have.

I have found numerous males, and this one female, “sleeping” out in the open on grasses and other vegetation at sunset. Many wasps (and solitary bees) can be found by looking in fields and meadows for sleeping individuals at dusk, in the early morning, or during inclement weather. 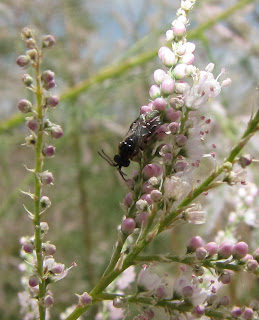