One of the most common solitary wasps of late summer and fall is a member of the family Scoliidae known as the “Blue-winged Wasp,” Scolia dubia. This is a fairly large insect, 20-25 millimeters in length, and easily identified by its bi-colored abdomen: Black on the upper half and red on the bottom half, with two bright yellow spots in the red area. There is rarely any variation in that color scheme, either. The common name stems from the brilliant blue highlights in the black wings that shine when sunlight hits them just right. 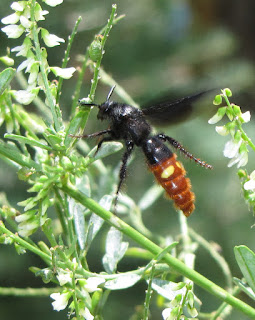 Scolia dubia is also a widespread species, found from Massachusetts to Florida, and west to Colorado, Arizona, and southern California. I have found them in New Jersey, Ohio, and Colorado. They are parasites of the grubs of scarab beetles, particularly the Green June Beetle, Cotinis nitida, and Japanese Beetles, Popilla japonica. Since Colorado has neither of these species, the Blue-winged Wasp must exploit a different host here. We certainly have plenty of May beetles (genus Phyllophaga), and the Bumble Flower Beetle (Euphoria inda), so I suspect those are the local hosts here in Colorado Springs. 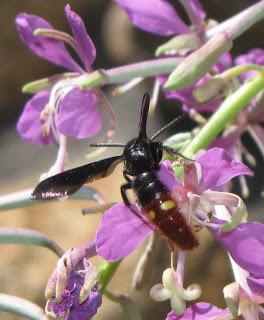 The female wasp somehow divines the presence of beetle grubs underground while flying low over the surface of the soil in what approximates a figure-eight pattern. When she detects one, she lands, and sets about unearthing it. Scoliid wasps have strong legs that are heavily spined. This adaptation facilitates their digging activities.

An exposed scarab grub will writhe around and seek to rebury itself immediately. The wasp stings the larva to paralyze it and allow her to manipulate it. She may leave the grub in situ, or tunnel below it, excavating a small chamber where she deposits the beetle larva and lays an egg on it, perpendicular its body. She then seals the chamber and leaves to start the process all over again, often staying underground and digging her way to the next grub.

Interestingly, these wasps may sting several grubs without laying eggs on them. The paralysis of the beetle larva is usually permanent, so regardless of whether they become food for larval wasps, the beetle grubs are unable to complete their own life cycle. This is a good thing if you happen to have an infestation of “white grubs” in your lawn or garden. 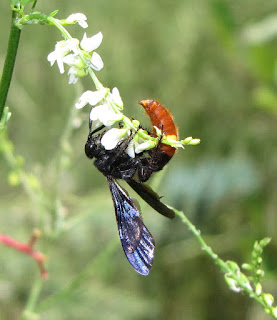 Back to the egg on the beetle grub, though. The wasp larva that hatches feeds as an external parasite on the grub for one or two weeks before spinning a silken cocoon around itself. There it will remain as a pre-pupa for the winter, pupating the following summer and eventually emerging as an adult wasp.

Male and female scoliid wasps commonly visit flowers to feed on nectar (and perhaps pollen). I find them most often on White Sweet Clover, Melilotus alba, thoroughworts (genus Eupatorium), and goldenrod (Solidago spp.). Males can be identified by their long antennae and overall more slender appearance. Males have a distinctive, three-pronged “pseudostinger” that is part of their external genitalia. Males cannot sting, and females are loathe to sting unless physically molested. 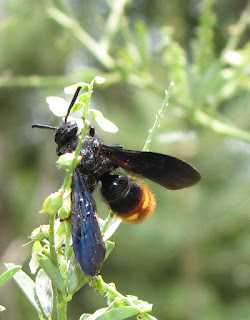 Another interesting aspect of the males is their behavior. Males also fly near the ground in a sinuous pattern, hoping to detect virgin females emerging from the ground. This usually happens in the morning, and males abandon their searching by late afternoon. At that time, they may gather together to roost for the night on vegetation, as the image below depicts. 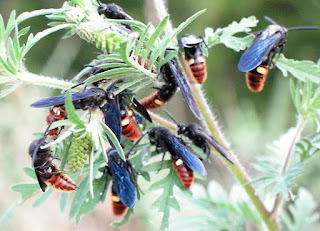 Keep an eye out for the Blue-winged Wasp in your own yard. Remember they are beneficial, but beware that large numbers of them may indicate you have a serious problem with white grubs.