There are many species of “tarantula hawk” wasps in the western U.S., but the largest is Pepsis grossa, formerly known as Pepsis formosa. Interestingly, this insect exhibits both an orange-winged (xanthic) form, and a black-winged (melanic) morph. The two are almost never found together in the same location. 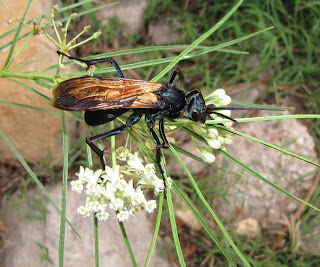 My experience with P. grossa has been confined to southeast Arizona, but the species ranges from southern California and Nevada to Kansas, Texas, Arkansas, and Missouri. It also occurs throughout the Caribbean islands, Mexico, Central America, and northern South America. The xanthic form is found from Arizona north and east, and also in central Mexico. In southern Ecuador and northwest Peru, there is a “lygarochromic” variation whereby the wings are dark at the base, with a median patch of dark amber, and a pale wingtip.

These are enormous wasps impossible to overlook. Females average a whopping 43 millimeters in body length (30-51 mm). Males are smaller, 24-40 millimeters. 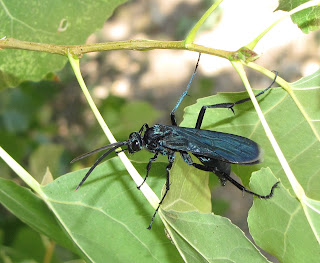 These giants can still be confused with the very similar, but smaller P. mexicana. Males of P. grossa can be distinguished by the fact that they have twelve antennal segments. No other Pepsis species has that number of segments. Females of P. grossa have long, coarse hairs beneath the femur of the front leg, though this feature can be abraded in older, worn specimens.

Females hunt for their tarantula prey mostly in the morning and evening to avoid overheating in the intense summer sun. Flying low over the ground, they may detect the presence of a tarantula burrow by sight or smell. Occupied tarantula burrows have a silk curtain over the entrance by day, and perhaps the wasp is tuned in to chemicals in the silk that indicate a spider is at home. The wasp may also land randomly and scour the soil on foot, flicking her wings and bobbing her antennae feverishly.

Once she does find a burrow with a spider inside, she cuts away the silk curtain and cautiously enters the burrow. Soon, both wasp and spider erupt from the burrow. This eviction behavior is crucial to the wasp’s success in securing her prey. She would have far less room to maneuver inside the spider’s tunnel. 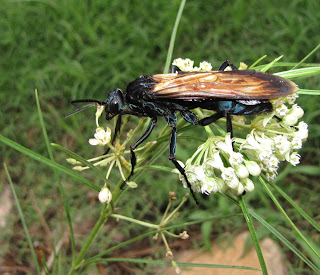 The wasp steps back, grooms herself thoroughly, and then sizes up her adversary. She uses her antennae to entice the spider into raising itself off the ground; or even antagonizes the arachnid into a threat posture whereby the tarantula raises its front legs high, exposing its fangs. The wasp then seizes the second leg and thrusts her stinger between the base of its leg and its sternum. She strikes a nerve center in that location which causes the spider to become paralyzed.

The wasp may feed on fluid from the wound created by her stinger, or groom herself again before commencing the laborious procedure of carrying her prey away.

Tarantula hawks often simply drag their paralyzed burden into back into its old burrow, but on occasion they may dig another burrow and bury the spider there. I am pretty certain I witnessed the very end of this sequence one evening at Tohono Chul Park in northwest Tucson. The female shown below was busy filling a shallow depression by scraping sand into it. 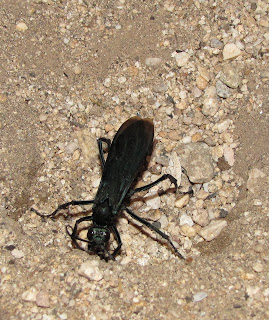 The female lays a single egg on the tarantula and then seals the burrow. The larva that hatches from the egg will then consume the spider. Once finished, the larva will spin a silken cocoon, metamorphose into the pupal stage, and eventually emerge as an adult wasp sometime later.

Look for both male and female tarantula hawks on flowers, especially milkweeds (Asclepias spp.), where they fuel themselves on nectar. During the heat of midday, they will seek shelter amid foliage on trees and shrubs, sometimes gathering by the dozens on one plant. Males, and the odd female, may also spend the night in such aggregations.

Despite their intimidating size, these are rather placid animals unless provoked. An agitated tarantula hawk adopts a threat posture with wings splayed and abdomen curled under. They also secrete a strong, but not unpleasant, odor. Take heed! Stings from Pepsis are not life-threatening unless you are prone to allergies, but the pain is incredible. According to Justin Schmidt, you are in agony for about three minutes, and then it is pretty much over (the pain). Actual results may vary, so I am not volunteering to experiment any time soon. Neither should you. 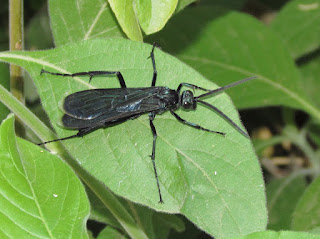