There is no shortage of the weird in the spider world, and I found one more example on our trip to Cape May, New Jersey on October 3, 2012. A series of posts linked with nylon rope provides a barrier along the dunes in Cape May Point State Park, and this fence was being utilized by one of the strangest of North American spiders, the Starbellied Orb Weaver, Acanthepeira stellata. 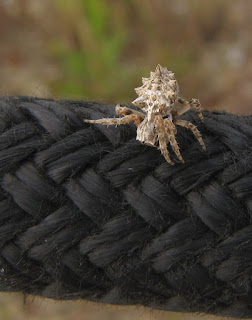 One of my friends on Flickr asked “Why is it star’bellied’ when it's star-butted? Is there more star-ness on its belly?” I have to agree with her. Maybe the person that first saw one described it from the ventral side. The pointy tubercles certainly show up well from both angles. The spikes probably help deter potential predators. Indeed, the abdomen is not as soft as it is in many other spiders.

These are not terribly large spiders. Mature females measure only 7-15 millimeters in body length, males 5-8 millimeters. The shape of the abdomen is distinctive, making them easy to identify in the field. Indeed, fields and meadows with tall grasses and herbs are where I have found them. Most references indicate they prefer this kind of habitat as well, where they lash their webs to rather flimsy stalks and leaves. They are also fairly common in cotton fields and other crops in the southern Great Plains. 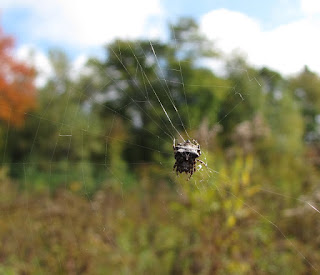 Starbellied spiderlings emerge from egg sacs in summer, and overwinter as immature or penultimate (one molt removed from adulthood) specimens. Adult females may be found from May to October, at least in Illinois (Moulder, 1992). Mature males can be seen from May to September. I found adults, or near-adults, in Cape May, and the one pictured at the top of the page appears to be “ballooning.” Ballooning is a dispersal strategy used by many young spiders to travel afar and stake out their own territories. A spiderling typically climbs to a high point, stands on tip-toe (“tip tarsus?”), and issues long strands of silk from its abdomen. These threads are caught by the wind, and when the spider lets go, it may be blown hundreds of feet, if not a mile or more. They can gain serious altitude, too. One baby A. stellata was captured at 1000 feet in the air over Tallulah, Louisiana on December 13, 1930 (Fitch, 1963).

These are orb weavers, and they spin the characteristic round webs of other members of the family Araneidae. The webs span about 6-10 inches, and are rarely more than four feet off the ground. The spider usually sits in the center (hub) of the web, head down, awaiting the impact of a prey insect. When disturbed, the spider invariably drops to the ground and feigns death, legs tucked close to the body. Among leaf litter and tangled grasses, it can virtually disappear until danger passes.

The Black and Yellow Mud Dauber, Sceliphron caementarium, is known to prey on Starbellied Orbweavers, paralyzing victims and stashing them in mud cells as food for its larval offspring.

Acanthepeira stellata itself preys mostly on nymphs (immature) of grasshoppers, plus other medium-sized insects. There is one record of an adult female preying upon an American Green Tree Frog, Hyla cinerea, but this is certainly not a routine event (Lockley, 1990). 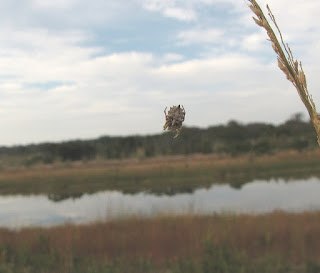