Some spiders are almost a complete mystery. They might have a species name, but that does not mean that much is known about their biology or life history. Such is the case with the Difoliate Orbweaver, Acacesia hamata. 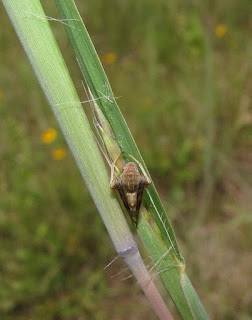 This image represents the only specimen I have ever seen, encountered at the Lynx Prairie Preserve in Adams County, Ohio on the morning of August 26, 2011. The species is recognized by the very distinctive pattern on the abdomen. “Difoliate” translates to “two foliums,” a reference to the dagger-like (“cardiac”) mark inside the wider wedge-shaped marking. The roughly triangular or wedge pattern with wavy borders that decorates many orb weavers is called a “folium.”

This orbweaver is of average size, mature females measuring 4.7-9.1 millimeters in body length, males 3.6-5 millimeters. The basic color varies from greenish gray to brown on the legs and carapace, and gray to green on the abdomen. Resting spiders often adopt the pose shown in the image above.

We know that Acacesia hamata is the only species of its genus found north of Mexico. The other five species collectively range from Mexico to Argentina, and are known from only a handful of specimens. A. hamata occurs from New England to Florida and west to Illinois and Texas.

The female I found was on a blade of tall grass in what amounts to a glade: a slice of prairie surrounded by deciduous woodlands. Other scientists have found this species by sweeping grasses in open fields, suggesting this spider prefers this kind of habitat. One other reference lists it as occurring in bushes and shaded woods (Kaston, 1978).

A more recent book describes it building its orb web only at night, taking it down before daybreak. Females startled by bright lights are capable of deconstructing their snare in under sixty seconds. The spider does this by strategically cutting support lines and eating the silk as it rolls up the web beneath it. A complete web is a vertical orb 20-25 centimeters across, strung three to four feet (one meter) above the ground in shrubs. Populations may be fairly dense, but the spider is only locally common (Howell & Jenkins, 2004). Mature individuals are found in early summer or mid-summer.

We still know nothing of the reproductive behavior of this species, or what the egg sac looks like. Does this species prefer one kind of insect as prey? Many such questions remain unanswered.

Try finding Acacesia hamata if you live within its geographic range. Look along forest edges, the ecotone where woods meet meadows, fields, and prairies.