Paper wasps in the genus Polistes are more diverse the farther south you go, reaching their zenith in tropical and subtropical climates. Global climate change may be nudging some species farther north, though, so it pays to keep your eyes open. One species that naturally ranges beyond the subtropics is the Common Paper Wasp, or “Guinea Wasp,” Polistes exclamans. 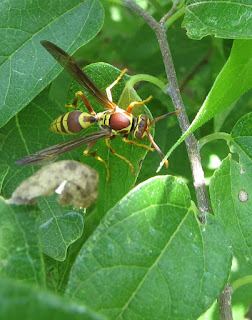 I recommend using the scientific name, as there is no official common English name. This is a widespread insect found from New Jersey south and west to Florida, Indiana, Illinois, Nebraska, Colorado, Arizona, and southern California. It also ranges into Mexico, and has been introduced to Hawaii; and there is one record for Ontario, Canada.

Look for their nests in sheltered places, such as beneath the eaves of homes. They will also nest in trees, but most of the time that I have found nests, they have been attached to some man-made structure. Here is one from beneath an interpretive sign on the hawk watch platform at Cape May Point State Park in New Jersey (October 17, 2010). 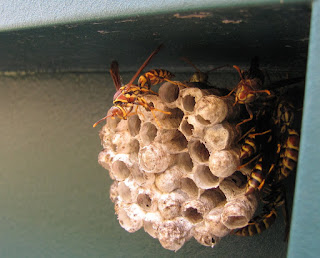 Here is another nest on the ceiling of a picnic shelter in the same park (October 3, 2012). 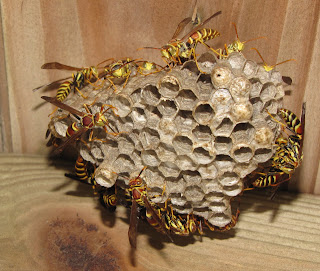 This is a fairly easy species to identify:

Like most paper wasps, this species preys on caterpillars that the worker wasps chew up and feed to the larvae in the nest. They feed on a wide variety of moth and butterfly caterpillars, including members of these families: Pieridae (white and sulphur butterflies), Hesperiidae (skippers), Noctuidae (owlet and tiger moths), Notodontidae (prominent moths), Sphingidae (sphinx moths or hawk moths), and Saturniidae (giant silkmoths). 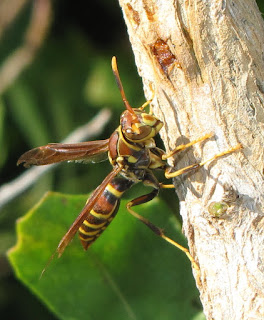 You would think that social wasps in general would not be bothered by predators and parasites given the presence of many stinging adult wasps ready to defend the brood (eggs, larvae, and pupae), but such is not the case. Polistes exclamans can occasionally lose its entire brood to bird predation. The acrobat ant, Crematogaster laeviuscula can also destroy a nest. Partial losses can come from Elasmus polistis, a tiny wasp in the family Eulophidae that infests young paper wasp nests that are defenseless while the foundress is away foraging. 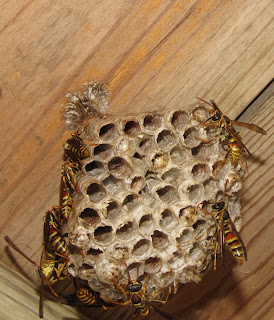 Note males on right have black on thorax and head

Irony of ironies, caterpillars of the pyralid moth Chalcoela iphitalis can take a toll due to their parasitic activities on the wasp larvae. The moths themselves are quite attractive: 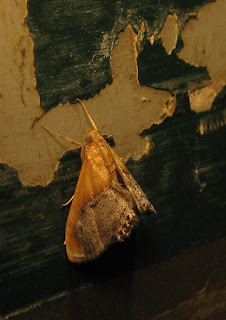 This is one of the most studied of social wasps, and the literature cited below is only a fraction of the scholarly works devoted to P. exclamans. Despite this, the known distribution of the species has been clarified mostly through documentation by citizen scientists contributing their specimens and images to universities, museums, and websites like Bugguide.net that are monitored by professional entomologists. Keep up the good work, folks. 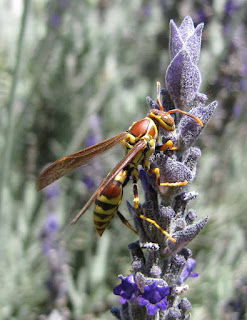