At this time of year, we decorate the inside of our homes with festive ornaments, many of them green or gold or red. Nature offers her own ornamental organisms, but many are too small to grab our attention unless we look closely. Such is the case for the brilliant little cuckoo wasp, Pseudomalus auratus. 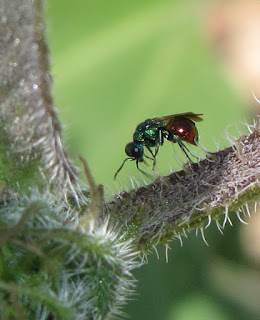 Cuckoo wasps in general are also known as “jewel wasps,” so colorful are they. This particular little gem averages only four millimeters in length, so despite its contrasting colors of emerald (head and thorax) and ruby red (abdomen), Pseudomalus auratus is easily overlooked. Rarely does this wasp visit flowers, either, so you have to seek it out elsewhere.

This species is not native to North America, but is common throughout Europe, Asia, and northern Africa. It was likely introduced here accidentally prior to 1828. Until fairly recently, records in the U.S. were limited to the Atlantic seaboard, but now it may turn up almost anywhere.

Larvae of this wasp are kleptoparasites in the nests of other solitary wasps, and solitary bees, that nest inside hollow twigs, pre-existing cavities in wood, and similar situations. Known hosts include the smaller wasps in the family Crabronidae, and bees in the genera Ceratina (small carpenter bees, family Apidae), Hylaeus (masked bees, family Colletidae), and Anthidium (wool-carder or cotton bees, family Megachilidae). The cuckoo wasp grub feeds on the provisions stored by the mother of the host larva. They literally steal the meal provided by the host for its offspring.

Pseudomalus auratus is not without its own enemies. Parasitic wasps in the families Ichneumonidae and Torymidae are known to kill the larvae, though those casualties might be the result of the parasites attacking the same host as the cuckoo wasp. 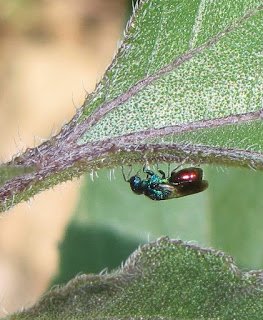 Look for adults of the cuckoo wasp around aphid colonies and extrafloral nectaries on various plants. I found specimens in Ohio at aphid colonies on Honeyvine Milkweed (Ampelamus albidus) and Northern Catalpa (Catalpa speciosa). The specimen shown here is from Colorado Springs, found sipping on the tacky exudates of Common Sunflower (Helianthus annuus).

Please share your own observations of this species with the scientific community. Our understanding of the distribution and hosts for Pseudomalus auratus in North America is in its infancy. 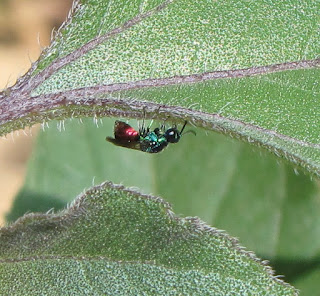