One of the oddballs of the family Tetragnathidae is the Cave Orbweaver, Meta ovalis. It does not have the exaggerated jaws, long legs, or elongated body typical of most other long-jawed orb weavers. It even spins a vertical orb web, in contrast to the usual horizontal webs made by other tetragnathids. 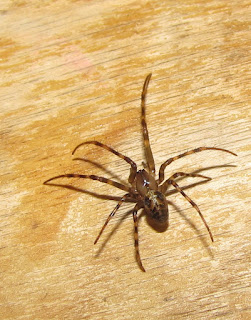 Meta ovalis has also gone by the name Meta menardi, but it has been determined that M. menardi is a separate species found only in Europe and Asia (to Korea).

This is an average-sized spider for orb weavers, females measuring 8-10 millimeters in body length an males averaging 9.5 millimeters. The species ranges from southeast Canada to Georgia and west to the Mississippi River, especially along the Appalachian Mountains and the Ozark Plateau. It is one of two North American species in the genus, the other being found only in California.

The typical habitat for cave orb weavers is, surprise, surprise, caves, abandoned mines, old wells, basements, and densely-shaded ravines. That is why I found this specimen on the exterior of a building, in broad daylight, in New Hampshire, on October 11, 2009. Since it was not associated with an obvious orb web, my first thought was that it was a sheetweb weaver in the family Linyphiidae, or maybe a cobweb weaver in the family Theridiidae. The spiny legs ruled out cobweb weavers, but I was still mystified. 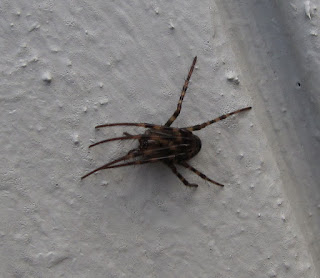 I collected the specimen and took it to the lab I was using at University of Massachusetts, Amherst, where I took the two images on the table. Fortunately, I had access to good references and was able to eventually identify it correctly.

This is not a true cave inhabitant in the sense that it dwells only in the entrances and twilight zones of caves, and not in the deep recesses. It has obvious eyes, and is fully pigmented. These characteristics classify it as a “troglophile” rather than a troglobite. The webs are usually built from the ceiling of a given location, especially in protected situations (termed “kettles” and “bells” on the ceiling of caves) where dessicating air currents can’t dry them to death. The spider seems to prefer sitting near the edge of the web rather than its center, but frankly, little research and observations have been done on cave orb weavers.

One exception to the dearth of studies is Meghan Rector’s thesis, cited below. She discovered that immature specimens of the cave orb weaver may be distributed slightly deeper in caves, and construct larger webs to increase the potential for the capture of more scarce prey.

Clearly, more work is needed just to determine the geographic range of this species. Fauna of caverns in general is poorly known, and often endemic to a single cave or cave system. Spelunking, anyone? 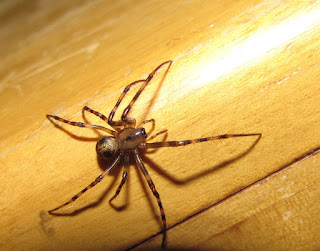