Surprise, surprise, surprise, yet another exotic invader has recently been discovered in the Sunshine State. When you have pythons, tegu lizards, and other alien animals roaming free and reproducing in the swamps, a tiny arachnid might seem to be no big deal. Still, it is symptomatic of greater problems in protecting our native ecology that extend beyond lax regulation of the pet trade. This particular species, Cithaeron praedonius, is native to the Old World, from western Africa (Gambia), to Greece, Libya, and Malaysia. It is an accidental introduction to Australia and Brazil (Carvalho, et al., 2007). The first report of this species in the U.S. came from Port Richey in Pasco County, Florida, in February, 2011. 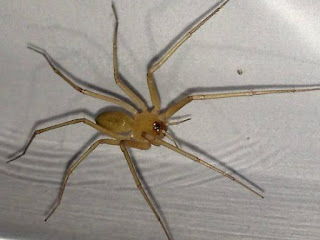 The manner in which the Florida record was revealed reflects the importance of citizen scientists and the power of the internet. A member of the Arachnoboards online community posted images of a spider he had found and that he was having trouble identifying. He then enlisted the help of Florida arachnologist G.B. Edwards. The mystery was solved in part when another Arachnoboards member located in Italy suggested the species. Specimens subsequently sent to Edwards allowed him to confirm the identification conclusively (Edwards & Stiles, 2011).

Whether this was an isolated incident of introduction seems to have been answered with a “no,” as another record was reported this last week on Bugguide.net, another influential internet resource for identifying North American insects and other arthropods. The location this time is Winter Springs, a suburb of Orlando, in Seminole County, Florida.

Cithaeron praedonius is a spider that hunts “on foot,” rather than spinning a web and waiting for prey to be intercepted by the silken snare. In fact, this species may be a specialized predator of other spiders. Observations have shown that in the first Florida case, the live specimens in captivity readily fed on native cobweb weavers, as well as juvenile Brown Widow spiders. Given its nomadic nature, perhaps the species has already spread to neighboring counties from the Port Richey location. 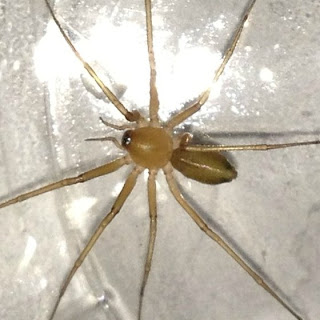 The spider is clearly reproducing, as flat, round egg sacs were found at the Pasco County location. Spiders of different ages were also observed. Each spider creates a silken “nest” in which to molt, and perhaps rest when it is not actively hunting. Otherwise, the spider dispenses with silk in its daily life.

These are small spiders, mature females averaging about 5 millimeters in body length, males about 3 millimeters. The compact arrangement of the eyes might fool one into thinking they might be juvenile males of the Southern House Spider, Kukulcania hibernalis. Worse yet, they could be mistaken for young recluse spiders (Loxosceles sp.). 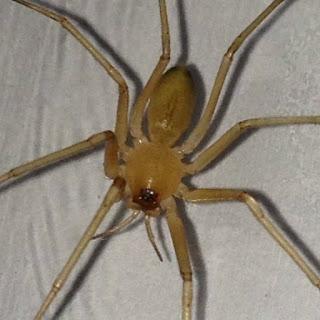 If you have seen Cithaeron praedonius, or any other unfamiliar spider, consider taking clear images and submitting them to Bugguide, or Project Noah, or another community where scientists and the public interact. Securing specimens and preserving them in ethyl alcohol, along with a label noting the date and location of capture (plus the collector’s name), is tremendously important in confirming identifications later.

Our invasive species have many points of origin and many avenues of access to new territories thanks to unregulated (free?) trade, our internationally mobile society, and our fascination with organisms both floral and faunal, from foreign soils. Perhaps we should be more satisfied with the life that lives here already, and how we can better protect it from exotic competition.