If the spider world ever had a beauty contest, the winner would likely be a jumping spider in the family Salticidae. Some are clad in the equivalent of clown suits, others in camo, but many seem to have a fashion sense that would be the envy of any human clothing designer. Such is the case with males of the species Phidippus octopunctatus. 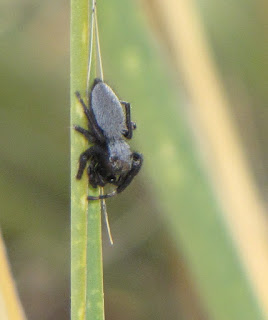 The species name might suggest that it would have eight spots (octo=eight, punctatus=punctures or spots), but this is not so. The male, a sizeable, densely hairy spider averaging 9.35 millimeters in body length, is black underneath, with black legs, and a beautiful silvery gray above. Females, slightly larger in size at 10.19 millimeters, are uniformly gray or beige. The spiderlings may have a vaguely striped pattern on the abdomen, but otherwise look similar to the adults. 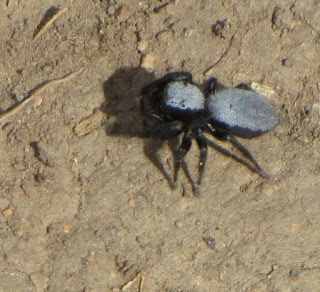 This color scheme may benefit the spider, as some species of velvet ants are very similar. Velvet ants are solitary wasps, the females of which are wingless, and capable of an excruciating sting in self-defense. Potential predators quickly learn to steer clear of velvet ants; and other arthropods that mimic velvet ants would also be avoided.

Velvet ants and Phidippus octopunctatus also favor the same kind of habitat: prairies, grasslands, deserts, and open fields. The spider ranges over most of the western U.S., from southeast Washington to California and east to Iowa, Missouri, and Texas. It also occurs in northern Mexico. 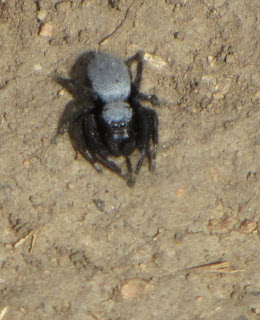 This is one wary animal, and getting images of wild individuals is a real challenge. They see you coming from a mile away (well, ok, at least a couple of yards), and dodge behind a yucca blade or quickly descend into undergrowth. Catching one out in the open, as I did in Stratton Open Space in Colorado Springs on June 1, 2012, is no guarantee of a good shot, either. They make a run for it as soon as they see you.

There are some truly spectacular images of this species by Mark Chappell of the University of California, Riverside. Note that the jaws are not metallic green or red as they are in other Phidippus species. Males may be territorial, as evidenced by the intimidating display shown in one of Mark’s images.

I encourage my readers to look for this species, as its geographic distribution is rather sketchy. No records appear to exist for Oregon, Idaho, or Wyoming for example. Adult specimens are usually found in summer, but their longevity is unknown. Do they live longer than one year? What does their courtship ritual look like? Your images, videos, observations, and notes could greatly illuminate our view of this spider. 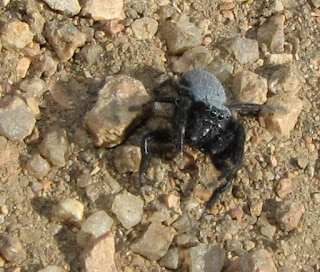