Spring is just around the corner here in the northern hemisphere, and one of the first insects you are likely to see is a buzzing fuzzy ball looking for nectar and moisture. That would be the Greater Bee Fly, Bombylius major. It is perhaps the most familiar and abundant member of the family Bombyliidae found in North America, Europe, the Middle East, and temperate Asia. 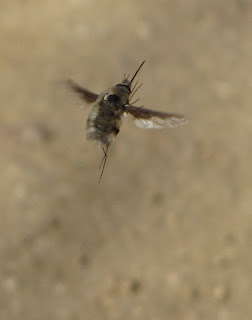 People unfamiliar with bee flies might interpret the long beak as a device for sucking blood, and identify the fly as some kind of mutant, hairy mosquito. Nothing could be farther from the truth. Those long mouthparts allow the fly to reach nectar deep inside some flowers, even while the fly may be hovering in front of the blossom.

That hovering behavior is yet another hallmark of bee flies in general, but this species especially. The territorial males are so accomplished that I was able to take images of one hovering about 2-3 feet off the ground at the Tucson Botanical Gardens in Arizona on March 24, 2010. 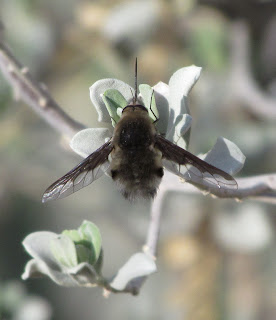 Also known as the “Large Bee Fly,” Bombylius major is not exceptionally big. Adults measure 12-18 millimeters, with a wingspan of up to 25 millimeters. Many other bee flies are larger. Size varies according to the degree of nutrition consumed in the larval stage.

Despite the familiarity of this species, surprisingly little is known about its life cycle. It is definitely parasitic in the larval stage, and so far the only known hosts are solitary bees in the genera Andrena (“mining bees”), Colletes (“plasterer bees”), and Halictus (“sweat bees”). This fits with the presence of the adult bee flies in the early spring, as that is also when female mining bees are excavating burrows and provisioning the underground cells with pollen and nectar. 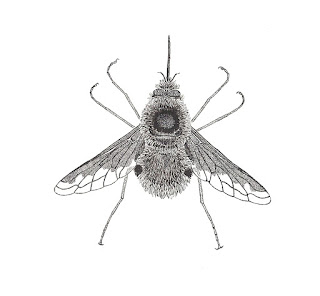 The female fly locates an open nest burrow of its host and supposedly hovers over it, lobbing eggs down the tunnel with flicks of her abdomen. The larva that hatches from each egg then actively seeks out an individual cell with a larval bee. The fly maggot then waits patiently while the host eats the pollen and nectar ball, growing large and plump just before it pupates. Then the maggot makes its move, attaching itself to the exterior of the bee larva. There it feeds as an external parasite, eventually killing its victim. 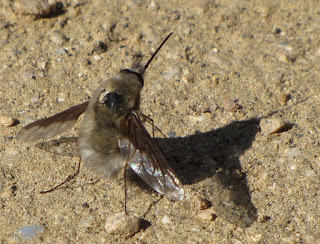 The mature fly larva then pupates, usually spending the winter in that stage. Scientists in Sweden have noted that pupae occasionally pass two winters before the adult fly emerges (McAlister, 2013). The pupa is armed with hooks, spines, and stiff bristles (setae) that it uses to work its way through the soil plug closing the bee’s burrow. Upon reaching the surface, the adult fly breaks out of the pupal exoskeleton, leaving it behind.

Look for these flies in yards, gardens, forest edges, sunny spots in woodlands, and similar situations. This species, which also goes by the names “Dark-edged Bee Fly” and “Black-tailed Bee Fly,” is flying mostly between March and June, but is especially common in April and May. They are at least potentially important pollinators of a number of wildflowers such as Gilia. 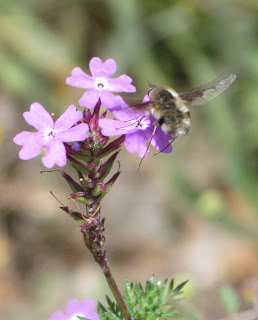