Few North American wasps are as conspicuous as the Great Black Wasp, Sphex pensylvanicus. This all-black insect with violet reflections on its wings is so large as to sometimes be mistaken for a tarantula hawk wasp. Males average 22 millimeters in body length, while females are about 28 millimeters (up to 35 mm) and more robust. 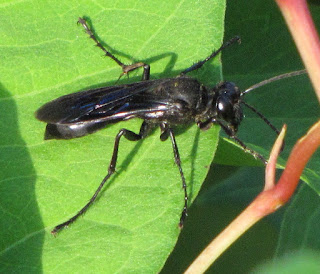 This is also a common and widespread species, ranging from southeast Canada to northern Mexico, and as far west as southern California. It is absent from the Pacific Northwest, and while I lived in Arizona for a decade, I did not encounter this species there, either. It is perhaps most abundant along forest edges in deciduous woodlands, sumac thickets, gardens, and fields with scattered trees. 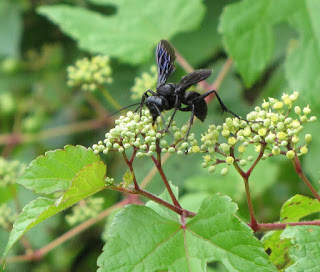 Though they are solitary, several females may nest in close proximity to one other. Each burrow is an angled tunnel about an inch in diameter and over one foot long. At the end of the burrow is a chamber from which other cells are added over time. The female leaves the nest entrance open while she goes about finding katydids. Her prey can be enormous. Adult Greater Angle-wing Katydids (Microcentrum rhombifolium) can be 52-63 millimeters long and are quite heavy. The Lesser Angle-wing Katydid (M. retinerve) is another prey species, as is Scudderia furcata, the Fork-tailed Bush Katydid. An average of three paralyzed katydids goes into each cell in the nest, a single egg being laid on the first of those victims. 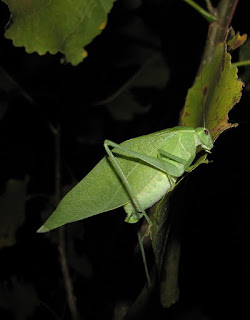 The wasp larva that hatches from the egg feeds and grows for about ten days, eventually reaching a length of 30-35 millimeters, and a diameter of 7-10 millimeters. Larval insects are almost always larger than the adult stage because so much energy is spent in the pupal stage. The larva probably passes the winter in a pre-pupal state, pupating the following spring and then emerging in summer.

Female Great Black Wasps are incredibly successful at finding katydids. One field researcher, Reverend John A. Frisch of Woodstock College in Maryland plugged the nest entrances in one aggregation. The result was 252 katydids piled up in only five days. That worked out to an average of nearly 17 katydids per wasp per day (Evans, 1963). The wasps fly with that heavy load, too. 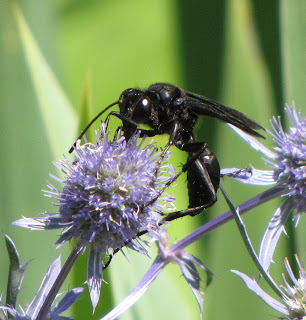 Hauling a large, heavy katydid back to the nest can attract unwanted attention, and one entomologist in Rhode Island observed House Sparrows (Passer domesticus) and, to a lesser degree, Gray Catbirds (Dumetella carolinensis) intercepting female wasps and relieving them of their paralyzed prey. As many as one-third of return trips by all the female wasps observed ended this way: empty-handed (Benntinen & Preisser, 2009).

The adult wasps themselves can be parasitized by Paraxenos westwoodi, one of the insects called stylopids or “twisted-wing parasites.” Wasps that have deformities of the abdominal segments, often with a bullet-like capsule or two protruding between segments, are victims of stylopids.

An interesting piece of historical trivia is that this species was the first insect subject of a paper by a naturalist native to North America. Observations of the Great Black Wasp by John Bartram (Philadelphia) were presented to the Royal Society (Royal Society of London for Improving Natural Knowledge) by Peter Collinson in 1749. The species was not officially described until 1763 by Carl Linnaeus. 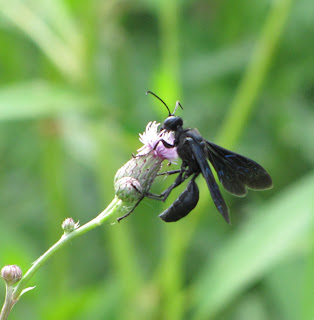