The spider family Homalonychidae is so obscure that there is not even a common (English) name for them. I would never know they even existed had it not been for finding a few specimens under old railroad ties in Tucson Mountain Park, Arizona, on April 23, 2011. I was confounded as to their identity, and I honestly don’t recall how I came to conclude what they were. 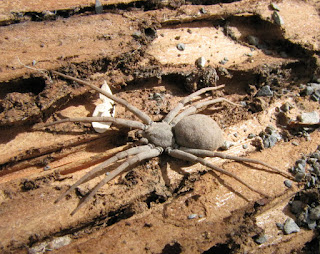 Perhaps they should be called “encrusted spiders,” because that is the appearance they usually give in the field. Indeed, particles of sand, soil, and fine debris catch in the short, stiff setae (hairs) that cover the carapace, abdomen, and legs of these spiders. They do not, however, bury themselves in loose sand like some members of the family Sicariidae. 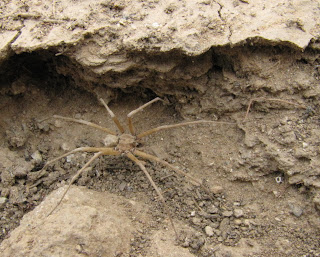 The family contains only one genus, Homalonychus, with only two species: H. theologus and H. selenopoides. The collective range of those species is small, from southern California and Nevada to Arizona, the Baja California peninsula, and northwest Mexico. The species illustrated here is probably S. selenopoides, judging by differences found in molecular DNA studies of the two species (Crews & Hedin, 2006). An additional species was thought to occur in India, but that one has now been placed in the genus Storenomorpha, family Zodariidae.

While homalonychids possess three pairs of spinnerets, they do not spin webs, and apparently do not lay down draglines in the course of moving about their environs. Males do employ silk to loosely bind the legs of females during mating (Alvarado-Castro & Jiménez, 2011). Mated females make silken egg sacs that they cover with small pebbles and other particles. 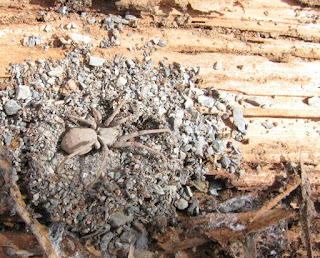 Whether these spiders are generalist predators or specialists is unknown. They have been observed in the field feeding on insects related to silverfish (order Zygentoma), and cannibalizing their own kind. Specimens in the laboratory feed readily on pomace flies (Drosophila) and crickets. Additionally, it is suspected that these are long-lived spiders that probably survive at least two years in the wild.

Homalonychids can be quite common, but I suspect they don’t disperse very far as juveniles and probably exist in scattered, localized populations. I welcome hearing what other people have experienced and observed regarding this strange family of spiders. The placement of this family in the larger context of phylogenetic relationships remains largely mysterious, given their relatively advanced physical features, but mostly primitive behavior.