People who think all spiders are creepy, and have no beauty about them whatsoever have never seen an Orchard Orbweaver, Leucauge venusta. This member of the family Tetragnathidae is pearly white or silvery with black, yellow, and red markings, and green legs. It is a truly lovely animal. 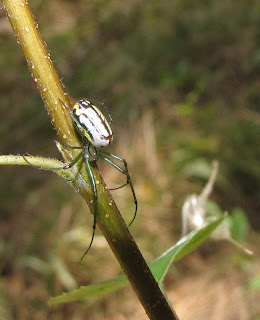 The Orchard Orbweaver is one of two species in the genus Leucauge found in North America north of Mexico. The other is L. argyra, found only in Florida. L. venusta occurs from southern Ontario, Canada to Florida, and east to Nebraska and eastern Texas. It also ranges as far south as Panama. I have encountered them in Ohio, Massachusetts, and South Carolina.

Despite its common name, it is not terribly common in orchards, preferring woodland habitats where it builds a horizontal orb web in shrubs, and bushes. Younger spiders have their webs closer to the ground, while adults spin them about 1.5 meters high. The web of an adult spans roughly twelve inches, and features an average of 30 radii (“spokes”) and more than sixty spirals.

The spider hangs upside down in the hub (center) of its snare, displaying a mostly black underside with a red crescent or rectangular spot. Unfortunately, many people mistake the Orchard Orbweaver for a black widow because of that red marking. However, widow spiders are almost never out in their webs during the day, and widows build tangled webs, not orbs.

It is also easy to mistake this species for orb weavers in the genus Mangora, but those spiders spin a vertical orb web, not a horizontal one. The Basilica Spider is also similar, and spins a horizontal orb web, but the orb is pulled into a dome shape. Finally, many sheetweb weavers in the family Linyphiidae resemble Leucauge venusta, but none of them spin orb webs. 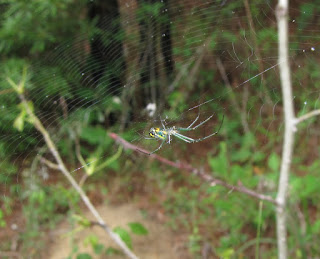 Mature females of the Orchard Orbweaver measure 5.5-7.5 millimeters in body length, and males 3.5-4 millimeters. Individuals overwinter as sub-adults, hiding in leaf litter and under loose bark. Adults are found most abundantly in late spring and early summer, perhaps avoiding competition with other web-building spiders that mature later in the season.

The Orchard Orbweaver is shy, and drops from its web straight to the ground if it feels threatened, often disappearing into leaf litter and undergrowth. Don’t let that deter you from looking for it. These are highly photogenic spiders. 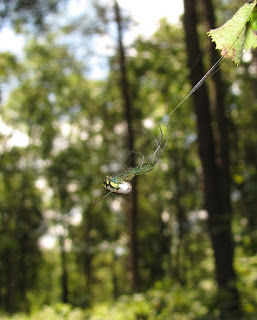