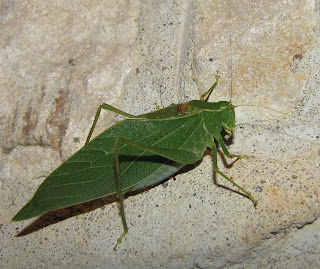 The Lesser Angle-wing, as its name suggests, is a smaller animal, adults ranging from 44-53 millimeters in length compared to the 52-63 millimeter Greater Angle-wing. Males of Microcentrum retinerve have the stridulatory area consistently brown in color, a sharp contrast to the bright green of the rest of the insect. I also find that Lesser Angle-wing Katydids have the veins of the front wing more explicitly defined than in the Greater Angle-wing, making the creature even more convincing as a leaf mimic. This rougher texture is not always a defining character, but it helps.

The key character in separating these two species of Microcentrum would naturally be the most difficult to capture from images of wild, living specimens. The front edge of the pronotum (top of thorax) is smooth and straight in M. retinerve. This front margin has a very small, central tooth in M. rhombifolium. 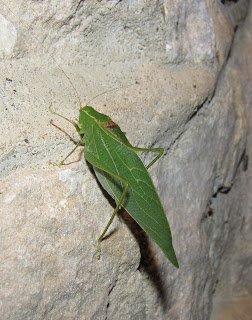 Both species occupy the same kind of deciduous forest habitat, but the Lesser Angle-wing Katydid has a more restricted range. It occurs from Long Island and New Jersey south to northern Florida and west to Missouri and extreme east Texas and Oklahoma.

Locating a singing male can be highly frustrating, as the interval between songs is even longer than in the Greater Angle-wing; and they don’t have a “courtship song” of repeated tics. Each call is a rapid series of 3-5 pulses, too fast to count (but revealed visually in sonagrams), repeated about once per second for a short period.

Look for the adults at the tips of branches on trees at night. It is actually easier to see them in a flashlight beam than during the day because they are more active, and stand out vertically against the otherwise horizontal plane of foliage. Moving katydids are always easier to spot than stationary ones. 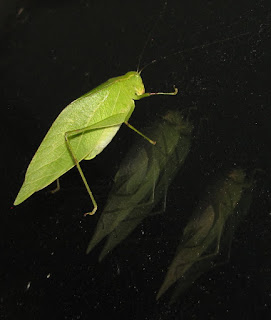 The Lesser Angle-wing Katydid will also fly to lights at night, which is how I obtained these few images. I am still not absolutely certain that the female is not actually a Greater Angle-wing specimen. It was climbing high on the wall and windows of a building and I could not gauge its size accurately, let alone note whether there was a tooth on the front edge of the pronotum.

Adults are most commonly encountered between late July and mid-October, but depending on latitude they may reach maturity as early as May. Other facets of behavior and life cycle are essentially identical to those of the Greater Angle-wing Katydid.