Too often the first thing that pops into people’s minds when they hear the word “fly” is a house fly or a horse fly, or some other nuisance or pest fly. I think if the popular association were with robber flies, family Asilidae, public opinion of the Diptera would be vastly improved. Case in point is the little Three-banded Robber Fly, Stichopogon trifasciatus. 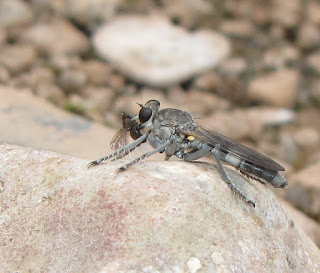 Far from being pests, or even pesky, robber flies are assassins of other insects, including the ones that bite and sting us. Many species are quite large, but the Three-banded Robber Fly is rather diminutive, measuring only 10-15 millimeters (and the top end of that spectrum might be generous).

Stichopogon trifasciatus is one of ten North American species in the genus Stichopogon, but the most widespread and easily recognized. It ranges from southern Canada to Central America, and coast to coast in North America. The bright silvery or blue-gray of the body, and distinct broad bands on the abdomen help set this fly apart from similar asilids. There is enough variation, however, to be somewhat confusing. The former species S. salinus, collected along the western edge of the Rockies from Idaho to northern Arizona, was recently synonymized with S. trifasciatus (Barnes, 2010).

The habitat and behavior of the Three-banded Robber Fly is suggestive of many tiger beetles. These flies like the beach! Well, rocky or gravelly beaches anyway. I have encountered them most frequently along the rocky edges of rivers and streams, but also well away from water. I found one in Colorado Springs on a rugged unpaved road. They like to be close to the ground, but on an elevated perch if possible. Startle one and, like a tiger beetle, it will take flight for a short distance before alighting again. 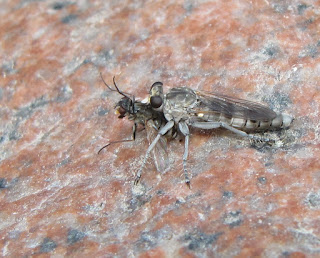 The adult flies feed mostly on other small flies, which according to one study amounted to 85% of their diet (true bugs, order Hemiptera, accounted for another 10%). Still, another observer noted that this species preys on small spiders to a large degree (Bromley, 1934). The fly attacks prey that is crawling on the ground, rather than intercepting it in flight as other species are known to do.

The life history of S trifasciatus remains mostly mysterious, but courtship behavior has been observed. The male apparently hovers back and forth before the female, his legs hanging and waving. He then attempts to copulate by pouncing on her (Preston-Mafham, 1993). Doesn’t sound like a romantic day at the beach, but…. 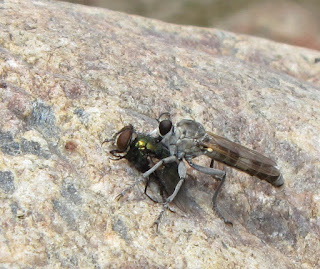