I was watching The Tonight Show on Wednesday, December 18, and one of the guests was actress Christina Applegate. I don’t normally pay much mind to celebrities, but when she started talking about a spider that is living outside a window of her home, my ears perked up. She and her daughter have more or less adopted the arachnid and named her “Seymour.” 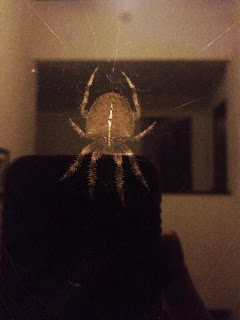 Ok, obviously, they named the spider before it was determined to be a female. Ms. Applegate has kept a running account of their spider via tweets on Twitter, including the above picture. There has been much chatter on her Twitter page, most of it supportive and helpful. Christina informed The Tonight Show audience that “Seymour” had been identified as a Tropical Orbweaver, Eriophora ravilla, which at first glance it resembles. I remembered that this species does not occur in southern California, though, and took a closer look at the image. Ah, Araneus gemma instead. I tweeted the correction, but never got a response. Gee, Christina can’t be *that* swamped, right?

While she admitted that if a spider that size were found inside her house, “it would be on the bottom of my shoe,” she and her daughter have embraced Seymour as an “outdoor” spider. They even sing to it at bedtime.

We cannot have enough positive stories like this of both parenting and arachnid appreciation. It is encouraging the number of celebrities who share their passion for the eight-legged world.

I had the pleasure of meeting Dominic Monaghan, “Charlie” of Lost fame, when he came through the 25th annual “Bug Fair” at the Los Angeles County Museum of Natural History back in May, 2011. He, too, had been on The Tonight Show, where he had talked about joining an expedition to search for an enormous tarantula species recently re-discovered in a museum collection. I asked if he had gone and he said they hadn’t been able to make it happen. Since, then, Dominic has gone on several expeditions for his BBC America series Wild Things. His “average Joe” approach is refreshing, and he is usually cautious in handling venomous species. He makes a good ambassador for popular entomology, arachnology, and herpetology. 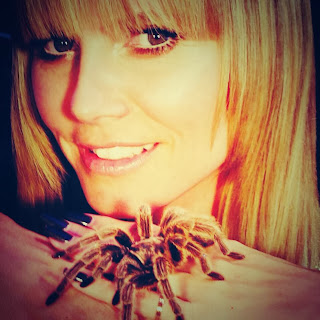 Back on Twitter, Heidi Klum, the supermodel, made headlines by tweeting a photo of herself posing with “Brutus,” a large tarantula, her “new friend for the day.” That one photo op can cause such a sensation should not be dismissed. The American Arachnological Society might do well to find a celebrity spokesperson for arachnids, or even enlist someone from its own ranks, like Dr. Greta Binford.

The point is, we can make a big impact on changing public attitudes towards organisms that are traditionally feared, but we might have to cozy up to the media. Scientists are loathe to speak to journalists since there have been so many misquotes, and information taken out of context, in previous history. We have to keep trying, though, and become the media ourselves through blogs, social media, and other creative outlets. Heck, don’t just read my blog, “re-tweet” it, and more importantly, write your own, too.