The wasp known by the tongue-twisting name of Pseudodynerus quadrisectus is a handsome, conspicuous insect found over much of the eastern U.S. Since it has no common, English name, let’s learn the pronunciation of its Latin name: “Sue-doe-DIN-ner-us kwad-ri-SEK-tus.” There, that was easy. 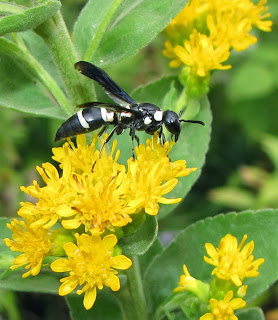 All joking aside, this is an interesting mason wasp that is frequently confused at first glance with the Four-toothed Mason Wasp, Monobia quadridens. P. quadrisectus is slightly smaller, more slender in overall build, and features more white markings than its cousin. Both wasps utilize pre-existing cavities in wood as nesting sites, including the abandoned nests of the Eastern Carpenter Bee, Xylocopa virginica, in outdoor structural beams.

Females of this solitary species use mud to partition a tunnel into several cells, working from the bottom up. Observations indicate that the wasp cordons off an empty cell at the end of the shaft, using mud as a wall that serves also as the bottom of her first cell. Each cell is provisioned with paralyzed caterpillars, the size and quantity of which has not been adequately documented.

The mother wasp lays a single egg in the cell once it has been fully stocked, then creates another mud partition. This sequence is repeated until the wasp has filled the tunnel to her satisfaction. She closes the entire nest with another mud plug, leaving another empty cell between the last cell plug and the nest closure. This may serve as a decoy so that parasites breaking into the nest find an “empty room” instead of the expected wasp larva or egg. 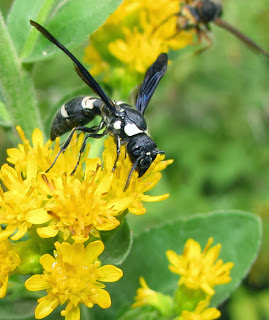 There are apparently two generations of this species each year; the winter is passed in a dormant, pre-pupal larval stage (Krombein, 1967). Adult wasps are on the wing from around the first of June through the end of August or so. They feed on flower nectar to fuel their flight activity. The images here are of a specimen observed at the Hitchcock Nature Center in Honey Creek, Iowa on September 17, 2013.

The literature indicates that Pseudodynerus quadrisectus ranges from Florida north to New Jersey, eastern Pennsylvania, and northern Ohio; and west to eastern Texas, Kansas, and even Colorado. There are Bugguide.net data points for southeast Nebraska, and now southwest Iowa, so perhaps the species is expanding its range or we have only just now recognized its presence in some locations.

The predatory nature of this wasp makes it an ally in the battle against pests in your garden. You can attract them by planting summer- and fall-blooming wildflowers like goldenrod (Solidago spp.) and thoroughwort (Eupatorium spp.); and by providing lodging in the form of holes drilled in wooden blocks and hung under the eaves of your home or shed. Bundles of hollow twigs work well, too. Such “trap nests” are commercially available from a variety of sources, but logs and dead, standing trees are a natural resource for nesting wasps (and solitary bees, too). 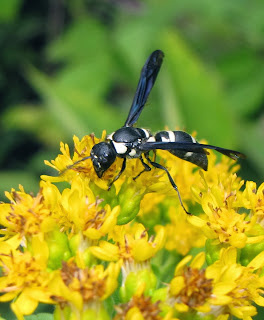