Before I started taking images of insects, I collected them. It is as equally challenging to go after them with a net as it is a camera. One example is the wary Wrinkled Grasshopper, Hippiscus ocelote, common east of the Rocky Mountains and the desert southwest. Well-camouflaged and alert, it is nearly impossible to approach even if you see where it lands. 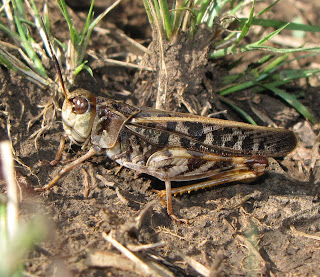 The Wrinkled Grasshopper tends to favor habitats with dense grass, and unlike other species that may simply land in a bare patch of soil after being startled into flight, this species actively buries itself amid the tangle of grassblades, further concealing itself. 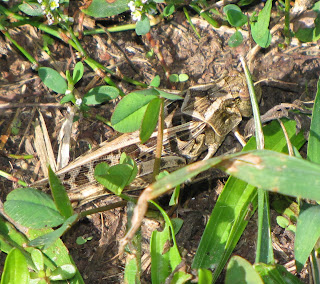 Mind you, this is not a small insect. Adult males measure 28-40 millimeters from nose to the tips of their folded wings. Females are more robust, and can be 39-53 millimeters. They look even larger in the field, especially when they take flight. The leopard-spotted forewings, called tegmen, open to allow the hind pair of wings to expand into colorful flying gear. Normally folded like Japanese fans and hidden under the tegmen, the hind wings are boldly marked with an orange, pink, red, or yellow area at the base, and a dark brown band near the wing margin.

Hippiscus ocelote can be confused with other “leopard-spot” species in places that they overlap, but the Wrinkled Grasshopper occurs as an adult insect from mid-summer through October. Similar species tend to be found in the spring and early summer. Note that in profile the Wrinkled Grasshopper has only one notch in the crest of the pronotum (top of the thorax), and a shallow notch at that. Despite the common name, the pronotum is only sometimes “wrinkled” or rough and “rugose” in appearance, especially in females. The color of the hind tibia (“shin” segment) is yellow.

This is a plains, prairie, pasture, and field species that is only occasionally found in open woodland habitats, even though its geographic range extends to the Atlantic coast and Gulf coast, save for peninsular Florida. 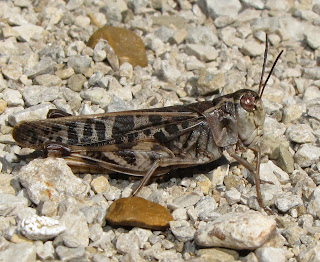 The winter is passed in the egg stage, females depositing “pods” of about 30 eggs each in the soil before the first frost. Still, in the most southerly reaches of its range, adults can persist well into winter. Nymphs and adults feed preferentially on grasses, especially bluegrass and Japanese brome. They sometimes feed on dead animals including their own kind. Most grasshoppers are, in fact, omnivores. It is not an economic pest of agriculture or rangeland.

The Wrinkled Grasshopper was formerly known by the scientific name Hippiscus rugosus, and can be found in older references under that epithet. 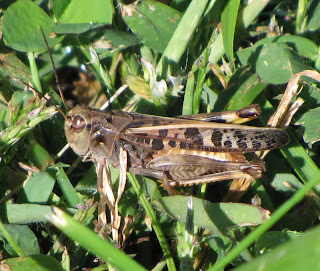