The holidays may be over, but the last thing you would want to cuddle up to under the mistletoe would be the subject of today’s “True Bug Tuesday.” Assassin bugs in the subfamily Triatominae are known as “kissing bugs.” There is nothing romantic about these vampires, especially considering that they can carry a lethal disease. Eleven species of Triatoma occur north of Mexico, most of them found in the southwest U.S. 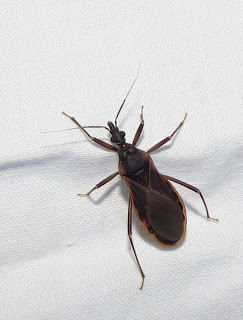 Villains by Many Names

Like any notorious outlaw, the triatomines have their share of aliases: conenose, blood-sucking conenose, big bedbug, Mexican bedbug, Hualupai tigers (Arizona), vinchuca (in several South American nations), chipo or pito (in Colombia and Venezuela), chirimacho (in Peru), bush chinch (in Belize), and barbeiro or bicudo (Portugese, in Brazil). The name “kissing bug” derives from the fact that triatomines do not like to be confined under blankets and sheets while feeding on human victims, preferring to tap blood from the uncovered face, especially around the mouth.

Kissing bugs begin life as eggs, dropped singly by an adult female. The nymph that hatches may take its first blood meal only two or three days after emerging from its egg. Blood meals are required for the insect to grow, each nymph passing through five instars (an instar is the interval between molts) before reaching adulthood. The adult insect is sexually mature, and has functional wings in most species. Mature triatomines range from 12-36 millimeters depending on the species. 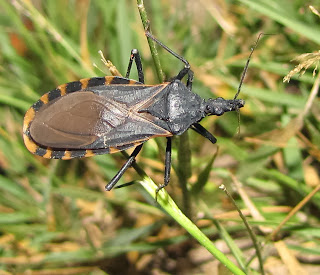 People are not the normal hosts of triatomine assassin bugs. Here in the U.S., Triatoma is mostly associated with woodrats (aka “packrats,” genus Neotoma), but several species accept blood meals from other vertebrates including opossum and raccoon, and sometimes livestock and pets. The nymphs of kissing bugs dwell mostly in the middens of woodrat nests, in the burrows of other rodents, or sheltered situations where hosts may be encountered regularly. People encounter kissing bugs when the adult insects disperse to find new rodent host populations during late spring, summer, and early fall. At that time, the bugs may be attracted to outdoor lights, and then sneak indoors. Their extremely flat bodies allow them to slip into the thinnest crevices. 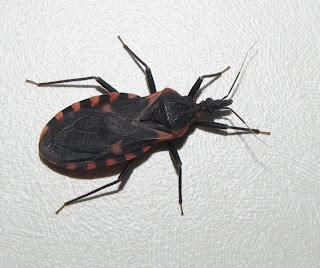 How to Stalk a Sleeping Human

The process by which a triatomine finds a host is akin to how a shark approaches a victim: with caution, and by relying on a series of different senses. Most pestiferous triatomines live in Mexico, Central, and South America. They dwell in the thatched roofs of rural homes, or in cracks in walls or beams. Hiding by day, they stir at night, usually simply dropping to the floor to begin the hunt. The bug uses its antennae to first detect gases in the breath of a potential target. Homing in on carbon dioxide, it begins its assault. As the insect gets closer, it switches to thermal detection, much like pit vipers. It is suspected that special pits in the antennae not only detect heat, but can determine whether the temperature is appropriate (too hot, too cold, or just right). The bug may even be able to calculate the size of the heat-emitting animal by “triangulating” with its antennae. A warm-blooded creature with the right attributes elicits the feeding response, and when the bug is within a few inches its proboscis extends like a divining rod for blood vessels. 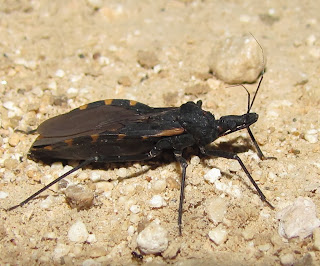 As if blood loss is not enough of an insult, the victim of a kissing bug bite may contract a deadly disease. In Latin America, several species of triatomines can transmit Chagas’ disease, also known as American trypanosomiasis. The ailment is caused by a parasitic organism called a trypanosome, related to the one responsible for African sleeping sickness. Unlike the tsetse fly vector of sleeping sickness, triatomines do not inject the microbes in the course of biting. Instead, the trypanosomes proliferate in the digestive tract of the bug, and are excreted in the feces. Due to the unrefined bathroom habits of these bugs, they may defecate while feeding, liberating the disease organisms. Victims inoculate themselves by scratching the microbes into the itchy bite wound, or contacting mucous membranes of the eyes or nose. Species of Triatoma in the U.S. are certainly capable of harboring trypanosomes, but they are “potty trained,” going to the bathroom about twenty to thirty minutes after feeding, usually having left their victim by then. Still, isolated cases of Chagas’ disease have been recorded in Texas, California, and Tennessee. 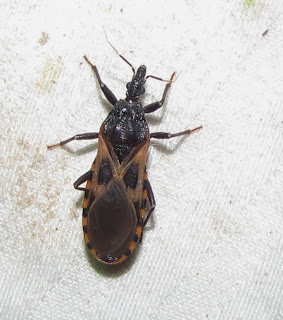 Bites from kissing bugs are painless while the insect is feeding, but the victim typically experiences itching and swelling the next morning. Most human victims wake up with a fat lip, but some may have an allergic reaction, going into anaphylactic shock with low blood pressure, swollen airways, and rashes being symptoms. This situation requires emergency medical treatment. Repeated bite episodes may make one more vulnerable to anaphylaxis, and also have the potential to become disfiguring. Many rural citizens in Latin America are horribly scarred from constant victimization by triatomines.

Several other true bugs enter homes in North America, and may be misidentified as kissing bugs. Those species include other assassin bugs that are not blood feeders, like the Black Corsair, Melanolestes picipes, and the Masked Hunter, Reduvius personatus. The Western Conifer Seed Bug, Leptoglossus occidentalis, is a completely harmless insect that seeks shelter indoors during late fall and winter. All of these insects can be mostly excluded by sealing cracks and crevices, repairing worn weatherstripping around doors, mending holes in window screens, and taking care to inspect firewood and other material and objects brought indoors from outside. 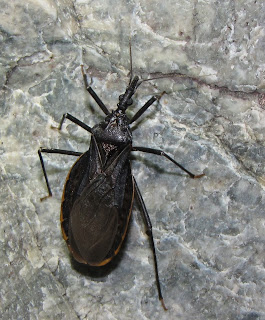