Hardly a field outing goes by when I am not confronted by some insect or spider I have never seen before, and such was the case on October 25, 2013. I had been on a mission to take more images of Red-shouldered Bugs, Jadera haematoloma, when seeking the answer to a question I had led to an unexpected spider discovery. 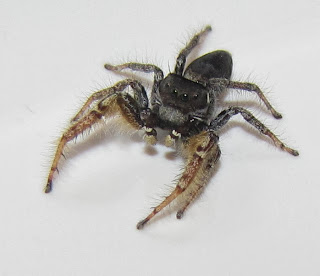 My wife and I had encountered the Red-shouldered Bugs earlier, on October 21, while walking the dog on the Rock Island Trail here in Colorado Springs. The insects were all on the ground, clambering no higher than the tip of a yucca leaf blade. Why were they feeding on fallen seeds and not climbing into the trees, I wondered.

I decided to investigate further on the twenty-fifth, looking more carefully on the trunks of the shrub-like ornamental trees. Ok, there’s one bug on the trunk, still pretty close to the ground. What about higher up? Oh, my! I was startled to find a rather large jumping spider ascending the trunk. With a formidable predator like that stalking the “canopy,” I don’t blame any bugs for not venturing off the ground. Further, the leaf litter provides a cozy layer of insulation from the cold autumn weather, and the bugs were taking advantage, no doubt. 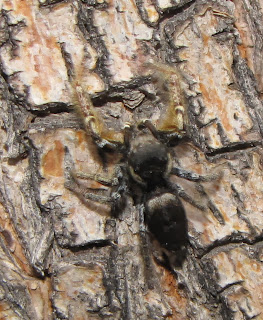 The spider really got my attention and I snapped off a couple of images in the dim light of late afternoon. I decided to capture the arachnid and take it home for closer examination and photography under more controlled conditions. I seemed to recall seeing images of this particular species previously, but a thorough search of books and articles failed to produce anything.

The more I looked, the more puzzled I became. So, I posted images in the forum at Spiders.us, where both amateurs and experts help people like me make identifications. One expert was intrigued enough that he solicited the opinion of renowned jumping spider authority G.B. Edwards. The result was a probable state record for Phidippus arizonensis. My specimen is a male, however, and Dr. Edwards suggested the remote possibility that it could be an undescribed species, the female of which has been collected in New Mexico. 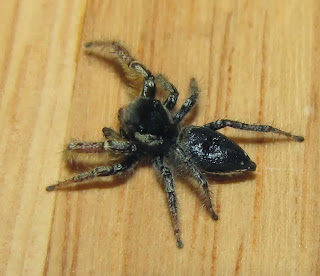 Sticking with the more likely scenario, I learned that despite its name, P. arizonensis is not known from Arizona. Records exist for Mexico, New Mexico, Texas, and now apparently Colorado. I have retained the specimen, which is still alive and eating regularly. When it finally expires I will preserve it for the Colorado Spider Survey at the Denver Museum of Nature and Science.

Males of P. arizonensis average a little over 9 millimeters in body length (8.35-10.02). Females are larger (9.02-13.36 millimeters), and dramatically different in appearance. Females have an overall yellowish appearance with spots and stripes on the abdomen. The vaguely metallic blue-black color of this male is pretty typical; and this is the only species in which the fringe of hairs on the front legs is entirely yellow in color.

Historical collection records indicate this species is most often found in the understory of oak woodlands at elevations between 5,000 and 7,000 feet. Colorado Springs is at 6,025 feet; and indeed the natural habitat in which I found this specimen is a sandstone ridge dominated by Gambel’s Oak that is stunted into tall shrubs. 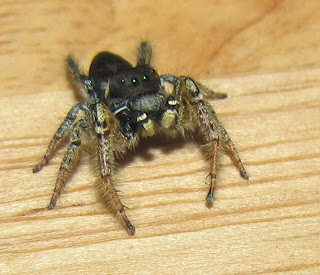 When you are out looking for arthropods, pay attention to your “gut.” If something looks odd, out of place, or otherwise intriguing, there is a good chance it is worth paying closer attention to. Our collective knowledge of the habits, distribution, and abundance of invertebrates in general is pretty weak, and your spotting could be invaluable.