One tends to think of flies as mostly drab animals, but there are many exceptions to that stereotype. Take for example this week’s subject of “Fly Day Friday,” the Ornate Snipe Fly, Chrysopilus ornatus. This species of the family Rhagionidae is found over most of the northeastern U.S. and adjacent southern Canada. 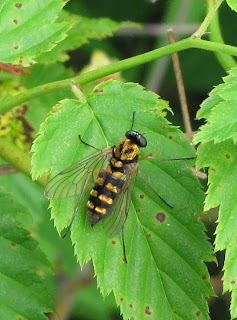 This fly owes its sparkly appearance to delicate, metallic scales appressed to its exoskeleton. The insect becomes worn quickly as the scales are abraded in the course of everyday living, so fresh specimens truly stand out. The scientific name reflects the fly’s appearance: “Chryso” is a Greek prefix meaning “gold,” while “pilus” is Latin for “hair.” “Ornatus” is Latin for “adorned.”

These are flies of moist woodlands and forest edges for the most part, though the female depicted here was seen on a leaf in a flowerbed at the University of Massachusetts (Amherst) campus on June 10, 2009. Look for them on foliage in the understory of open hardwood habitats, mostly in June, but also in May and July. Try meadows and swamps as well. 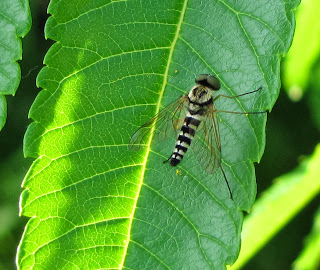 Surprisingly little is known about the life history and feeding habits of these flies. Larvae of Chrysopilus in general tend to occur in damp soil that is rich in decaying organic debris; or in rotting wood. It is suspected the maggots are predatory on other invertebrates, at least in part. One source indicates the larvae are indeed predatory, on insects occurring “in clumps of moss and dead wood” (Evans, 2008). A cursory search of the literature does not reveal conclusively what the adult flies eat, if they feed at all.

The distribution of C. ornatus includes New England and southern Ontario, south to Florida and Tennessee, and west to Manitoba and Kansas. Your own observations could shed more light on this and related species of Rhagionidae.