Chances are you have never seen one of the “comb-tailed spiders,” also known as “dwarf sheet spiders,” in the family Hahniidae. Me, neither, until I started sorting pitfall trap samples at the University of Massachusetts, Amherst, for six months in 2009. Maybe you have never even heard of them before. Forgive yourself, these spiders are, while common, very seldom encountered. 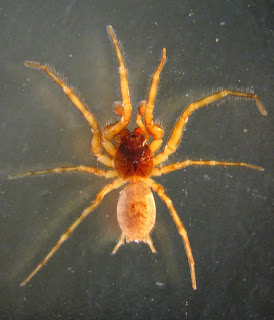 The overwhelming majority of haniids are under four millimeters in body length….as adults. A few in the subfamily Crypheocinae can reach nearly eight millimeters. So, they are easily overlooked anyway. The images shown here are of preserved specimens under the magnification of a binocular dissecting microscope. Considering their cryptic habits, it is no wonder these escape attention.

Members of the subfamily Hahniinae, save for the genus Neoantistea, don’t even build webs (here in North America at least). The webs of Neoantistea are very thin, sheet-like, and small. They are only visible when heavily laden with dew. They are frequently stretched across the footprints of mammals, and other small depressions in the soil. The spider sequesters itself amid mosses or soil particles at the edge of the web, traveling on the underside of the web to secure prey. 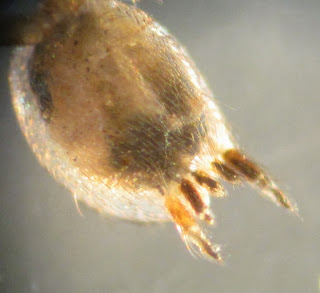 The most conspicuous feature of hahniids in the subfamily Hahniinae is the arrangement of their spinnerets. All six are aligned in a single row across the back of the abdomen, presumably resembling the teeth of a comb (hence “comb-tailed spiders”). Members of the subfamily Cryphoecinae have a more “normal” arrangement, the spinnerets in two, staggered rows.

Identification of the different genera of hahniids hinges on such characters as the placement of the tracheal spiracle on the underside of the abdomen, relative size of the anterior median eyes, length of segments on the lateral spinnerets, and shape of spurs on the palps of mature male specimens. That’s just for Hahniinae. Cryphoecinae genera are distinguished mostly by features of the male and female genitalia, and dentition of the cheliceral fang furrow (groove in the jaw that receives the folded fang). 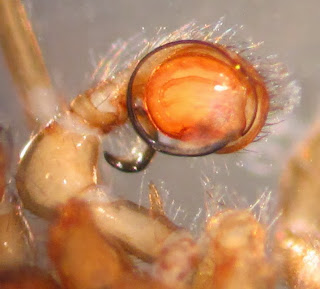 Don’t let the complexity of taxonomy discourage you from looking for these spiders and appreciating their subtle beauty. The genera Neoantistea and Hahnia, with 11 and 7 species respectively, occur throughout most of North America. Antistea brunnea ranges in British Columbia, southeast Canada, and the northeast U.S. Most of the Chryphoecinae are restricted to North America west of the Rocky Mountains, and principally in Canada and northern states, or at least in chronically rainy forest habitats. 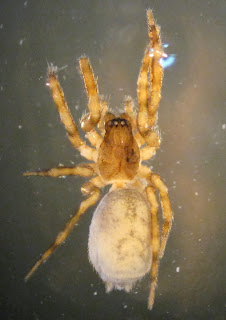 Cryphoeca Montana is a nocturnal spider that has been collected from under bark on dead trees, in leaf litter, moss, and under stones.

The family Hahniidae was once lumped within the family Agelenidae, the funnel-web weavers, at least as recently as 1957, but is now recognized as a stand-alone family.