Back in the spring of this year, I broke the story of a new immigrant species to the U.S. that my wife found at the zoo where she works. The story is here, but today's post is the sequel. Initially, I thought that wasp might represent an isolated incident, a single specimen that managed to sneak over in a shipment to the zoo. That is clearly not the case now. 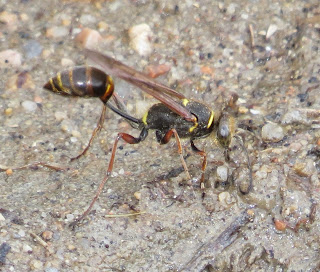 Taking advantage of an unseasonably warm autumn afternoon on October 6, my wife and I went to Quail Lake Park here in Colorado Springs to look for birds and other wildlife. The park is in the foothills of the Front Range, not that far from the zoo. There, on the muddy shore of the artificial reservoir, in the dimming light of late afternoon, we saw a trio of wasps. Two were familiar natives: The Western Yellowjacket, Vespula pensylvanica, and the Black and Yellow Mud Dauber, Sceliphron caementarium. 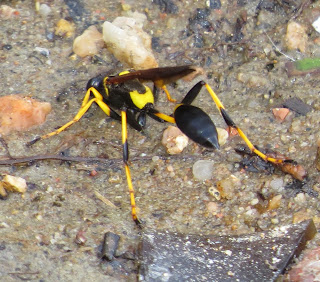 Heidi asked if the third, smaller wasp was also a mud dauber, and I answered yes, pretty much dismissing it as simply an unusually dark S. caementarium. I took images, though, and looking at the result I was both excited and crushed. Here was another specimen of Sceliphron curvatum, and she was clearly gathering mud to make a nest. This is pretty conclusive evidence that this Asian species is now established here in the U.S.

Nearby the lakeshore is the restroom building for the park, and I wondered if this wasp had her nest there. Ironically, cliff swallows had built numerous nests under the roof over the "porch," but I could find no evidence of any insect nests, not even paper wasps. Some of the beams are hollow metal, though, and it is certainly conceivable that wasps are nesting out of sight. 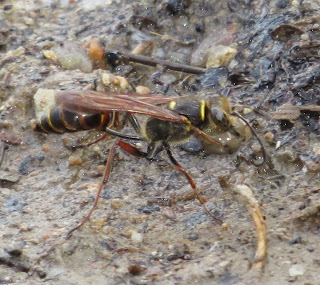 S. curvatum about to take off with a ball of mud

I suspect that Sceliphron curvatum exists in other regions of the U.S., too, particularly around the Appalachian Mountains, but has simply been overlooked. It may not be abundant yet, but that can change quickly. When I lived in Cincinnati, Ohio, I recall finding my first specimens of the introduced European Paper Wasp (Polistes dominula) to be a novelty in the early- to mid-1990s. A few years later they were the second most common species of paper wasp I was seeing.

Again, I ask my readers to be on the lookout for this "new" mud dauber, and make your observations and images known through every means possible, especially social media like Facebook and Twitter where you are likely to get almost immediate confirmation or refutation of your identification. The more eyes looking out for unusual insects the better.